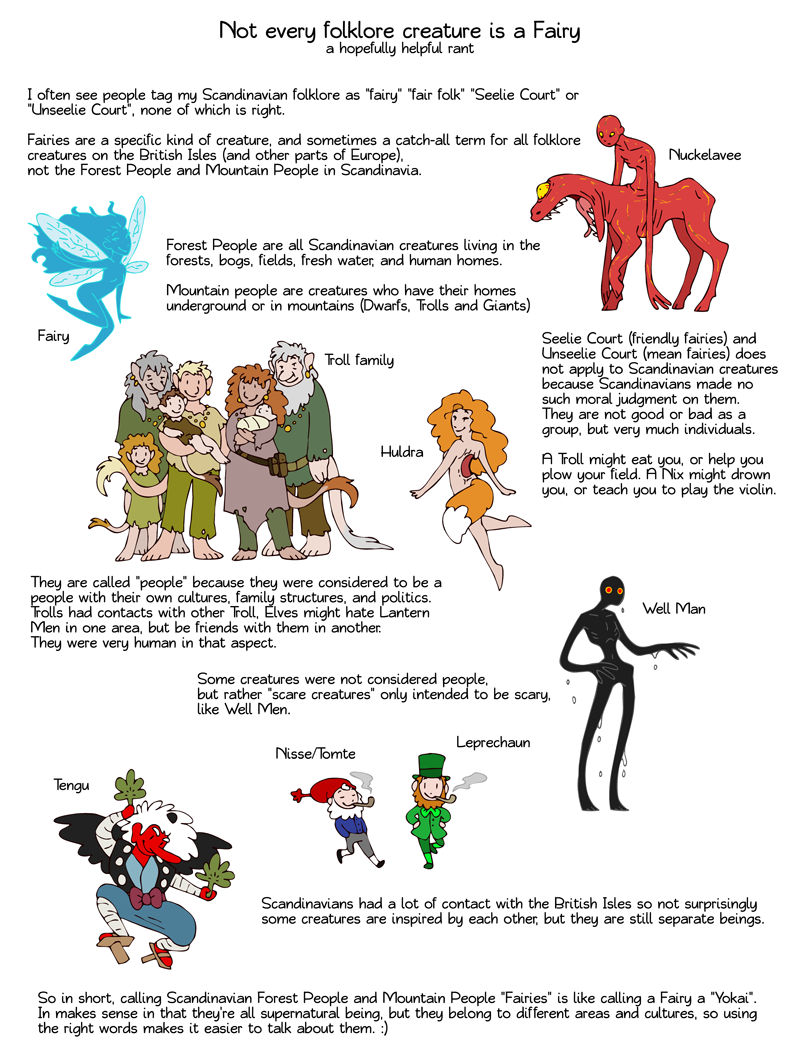 I just want to point out there is no reason for the last few comments made to essentially bitch and 'correct' that the terms used in this comic weren't specific to some people's liking.
It's a bloody comic and personal opinion, if she wants to define 'seelie and unseelie' in such a way deal with it, every book read claims the fictional/mythical races and such as something different.
I've read books claiming what the comic states and others claiming what the comments state, both are valid but still...
It's mythology not science, it is going to change depending on who read what and grew up where.
Really bugs me Americans are bitching and trying to bring up 'facts' when for all they know it could be a cultural difference or difference in materieals read.
Ffs people it's a webcomic let the poor woman rant as she pleases without trying to start an Internet war of opinions.


@Kitom I wasn't attempting to bitch I was bringing up a point of comparison that I found in most of my research. Most people still consider the courts the way the comic states and that's fine, I just wanted to point it out.
Secondly, and I'm sorry for getting a bit angry about this, I apologized before the comic, I was being as polite as I could, had no intention of starting a "war of opinions" (which I might add, this post is just fuel to the fire if you think that's what we're doing), you have no idea how much research I've done on the religion of the British Isles so you have no right to make that "for all they know" comment when you ALSO don't know how much research the commenter is making, and oh my god, if someone wants to point out a differing viewpoint, let them. It's not a crime.
I literally wouldn't have replied to your comment if you hadn't made the assumption that I was just a stupid American treating my opinion like fact, but no, you had to be a bratty little kid about it. I am actually pagan, did a lot of research on fairies from several sources, and found that most calling Unseelie "mean" were Christian retellings, which have a biased spin to them. The fact that you made an assumption is incredibly insulting to me.
Grow up, people sometimes make mistakes and are then given small corrections, deal with it. That's life. Why make an entire account you're never going to use again to bitch about your country "bitching"? That's childish. And you know what else is childish? Adding a vague comment referring to two entire comments that's rude. At least the two correcting comments were polite.
I don't even post comments that often. Maybe, instead of bitching about the corrections, you could've, say, actually started a polite, intellectual discussion with one of us. That sounds a lot nicer and more mature don't you think. I would've preferred it, I think a discussion on differing beliefs is a welcome thing, that's why I made the comment, to build on a discussion, not bitch about how Humon was wrong. She's not, Unseelie can be little shits sometimes, but I was offering a counterpoint. I'm sorry if I irritated you with a comment trying to offer a differing opinion.
Mythology in general does hold some facts, all of them, Christian, Islamic, Jewish, Pagan, etc. hold certain widely accepted beliefs, so it isn't always going to change from place to place, and Christianity screwed up a lot of stuff when recording it in an attempt to demonize the Northern religions, so that part of the sources isn't reliable.
Accept that not everyone posts a correction to bitch and might be trying to offer another viewpoint.
RainbowPress


I mentioned this before on your tumblr account and I feel bad correcting you because you are, for the most part, correct, but Unseelie and Seelie courts were never a distinction between "good" or "evil" fairies, either could be malicious or mean-spirited. Originally the courts, which originated in Ireland, were used to denote whether the fairy liked sunlight or being seen. Unseelie tend to be nocturnal and solitary, Seelie tend to be diurnal and group-oriented. It's more common to see two Seelie together than two Unseelie. Over time the solitary nature of Unseelie was taken as outright reclusiveness, and they gained a reputation for being particularly nasty if you bothered them, particularly on purpose (a banshee will only scream if you get too close to her, a dullahan will blind you if you try to watch him/her on an errand, etc). Unseelie are also commonly associated with death. Dullahan are the Irish personification of death, and banshee warn of an impending death.
Honestly Seelie fairies are a lot closer to a modern definition of evil, as they'll pull pranks unprovoked, even if they can be helpful. Leperchauns, despite being Seelie fairies, are actually probably the one of the nastiest fairies in existence, but they're still Seelie. Really the difference between Seelie and Unseelie fairies isn't whether they're mean or friendly, but whether they often interact with people. Generally you won't see an Unseelie fairy unless you're about to die, and avoiding them will just piss them off and make it more likely that you will die.
Pretty much all fairies dislike humans and/or will kill you if you piss them off so I don't think there's much of a good/evil distinction as there is a reclusive/social distinction.


@RainbowPress Thanks. When reading some books about fairies, I once stumbled upon a word that describes fairies: all of them are not mean, nor malicious, they are just unkind. They are on the opposite of kindness, they treat people like we treat animals. Some of us may feed and groom them in exchange for some services, just like the gnomes sew boots in exchange for some cream in a pot. Others hunt them for food or for pleasure, just like some mean fairies do. When an animal meddle with our crops or prey on our cattle, we mostly kill it outright, so do goblins do when people stumble where they are not supposed to be. We may take a very nice-looking squirrel, enjoy its' view for some time and then let it go in a completely different forest, not thinking the slightest how it will find food and place to sleep in a completely unfamiliar place, and how different is it with old Rip Van Winkle's story?

They don't dislike us - in general - because words 'like' and 'dislike' do not describe their views upon us. They are simply different.


@RainbowPress Well, humans do it always, both in old myths and in news, and in both cases sometimes it does not end well.
Mithaldu


Just a small thing i wish to share apropos the Nuckelavee: https://www.youtube.com/watch?v=1JQpE7n6eUk


Last verse in a ballad of ours, about the "nykur" (the neck):

I also remember one of my teachers telling a story, about a neck, living in a nearby lake, who very much enjoyed eating postmen with blackcurrant jame.


What is that nuckelavee monster? It must be a scare creature, because it's going to haunt my nightmares.


@MoralCode So I got kind of curious and looked it up to try and help out a little. Keep in mind this was a quick wikipedia check so it's not completely reliable.
Apparently a nuckelavee is a horse-like water demon originating in Norse and Orcadian (the name of the culture of the Orkey Isles, to the North of Scotland) mythology that wilts crops and sickens livestock with its breath. It's considered one of the most horrible demons on the Scottish Isles. So yes, it's a scare creature, of a sort.
Here's the full wikipedia article: https://en.wikipedia.org/wiki/Nuckelavee


@RainbowPress
The name seems very similar to the neck.


@Noregskong It very well may be a similar creature, Norse stories often have water monsters, as I've noticed, more so than many others.
DaugtherOfTheSea


Amen to that, sister
sheherazahde


Yes and no. You are of course correct that the Scandinavian folklore is totally different from British folklore. They are different cultures. Although Vikings did colonize parts of Great Britain on several occasions bringing Scandinavian customs. Still, they are not identical.

But British fairies aren't just little naked winged women. The Fair Folk come in many shapes and sizes and were considered people with their own cultures, family structures, and politics. Whether they were considered good or evil depended on the time period, the area, and the influence of Christianity.

Japanese Yokai are not like fairies, they are more like what you call "scare monsters". I would have no problem if a Japanese person were to lump British fairies and Scandinavian Forest and Mountain people in with Japanese Kami, because I think they are all the same class of creatures. Even though they come from different cultures and have different shapes and customs.


@sheherazahde
In Scandinavia fairies and fey means little creatures with wings. She didn't say it ment the same in the British folklore.
Rutana


I actually often enough encountered people, who called "Fairies" "Elves"... which annoys me to a similar degree...
When I correct them, most time they directly reply "...where's the difference?", as if it wouldn't be pretty obvious from the get go... ._.
drperkele


I feel it's worth mentioning that it's possible that some of these people are using "fairy" with Tolkien's definition, which is essentially any fantasy creature.

That being said, it's a flimsy way to use it and associates more with fiction writing than actual folklore, so ultimately, I do agree with your rant. Calling trolls fairies seems fundamentally wrong to me.
r2b2grady


So, curiosity question related to this (as someone who LOVES folklore, and has recently started to get into Scandinavian folklore thanks to Fria Ligan): I know that in Swedish folklore, creatures/monsters are called Väsen. Is there a cognate/equivalent in Danish, then, or are they split between Forest and Mountain?
Add comment: Please Sign in or create an accout to comment.