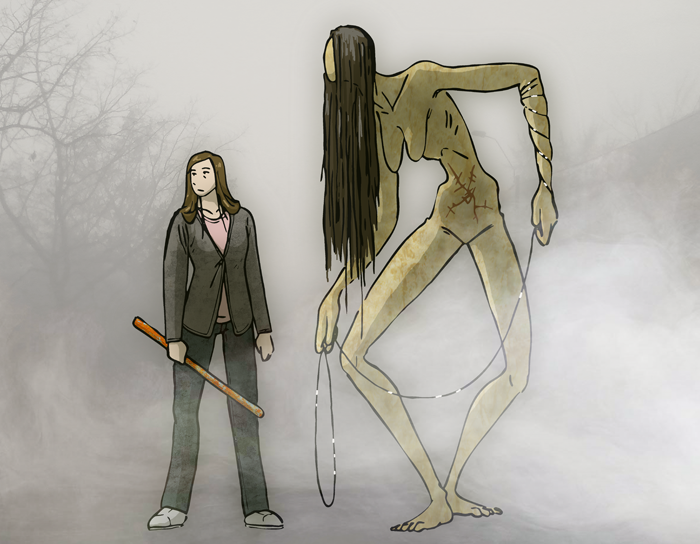 So much of the Silent Hill franchise is about the sexualization and hatred of women, with the male monsters (that act as guides for the main characters) mutilating and raping female monsters as an expression of the male character’s mindset.

How about an adult woman as the main character for once? A woman who has gone though a lot of hardship in her life and has a deep, subconscious hatred of men. She doesn’t want to acknowledge these feelings however because she has a young son, and the thought that he will one day be a man too makes her uncomfortable, so she has to pretend she has no problem with men, both for his and her own sake.

That is why her “Pyramidhead” is a towering female monster with scars on her abdomen like she ripped a baby out once. She attacks male monsters along the way, mutilates their crotches, rapes them with their own phallic weapons, and strangles them with her metal loop. She never attacks the main character unless the main character attacks her, and even appears to clear the way for her on a few occasions, guiding her through the game.

It sounds harsh, but just think about what happens in the Silent Hill games.


Pyramid-head is a representation of guilt and destructive feelings towards the player. That is why he constantly attempts to kill the main protagonist and yet appears to help you progress in places- he both wants to kill them as well as make them face reality.
Pyramid-head attacks other monsters because, as his role of guilt, he tries to repress the other monsters that all represent memories or feelings that the player wants suppressed.
While I share your hatred of the sexy nurses being overused... they aren't a sign of hatred toward females but a representation of repressed libido and sexual thought. The series is a great fan of body horror to try and convey a type of gross fascination of the deepest most innermost horrors of the main characters, they continued on in later games and marketing material because marketing execs do not understand their representation.
If there was to be a female pyramid-head she most certainly would NOT be a guide, but a terrible malevolent force desperately trying to kill the main character. Every single creature in silent hill despises the player- because they are the feelings the player character either represses or feel are eating them alive from the inside.
While the character concept is interesting she is lacking the helmet- which is a personal design choice yes, but is poignant for the character of 'guilt' because the inside of it is lined with spikes like an iron maiden, it also obscures vision and makes them walk as if it is a burden. The helmet is a punishment on the character. I feel this is true of all the creatures in silent hill, where a majority, if not all of them do not generally 'stalk' you because their own lives of torment, manifested by the player, are simply too much to bear. The gigantic weapon is also a type of tether, a huge weight he drags along behind him, but he cannot discard because he requires it.
If the female monster was not given restraint and still followed the art style of the games, it would symbolize that your main character feels absolutely no remorse about her feelings and genuinely wishes to mutilate and kill all males, even her son, without apology.

That deconstruction aside however I do like her overall monster's look.
Bluesamurai


I've come up with the name Diana Novak for the female protagonist. Diana is the roman name for Artemis, Goddess of the hunt,Childbirth, and Virginity. Artemis was known to bring bad luck to men that tried to dishonor her, and for turning a man who spied on her bathing into a stag. Considering what you've described the name is a perfect fit!
deusynecdoche


Only the second game has sexualization or hatred of women as a significant component, and it feels like you're generalizing that to represent most of the series. Also, Pyramid Head doesn't act like a guide - he tries to kill James whenever they meet. This is true of almost every monster in every game. The closest thing to a "guide" is Valtiel from SH3, who kind of helps Heather (but not really).

Having a Pyramid Head stand-in who actively helps the player would go against the omnipresent malice of the otherworld as seen in every other game. It would undercut a lot of the horror if one of the biggest, scariest monsters was your buddy. Also the "mutilates monster crotch" part is a bit on the nose, and could maybe use a bit more abstract symbolism, even it were just as gory.

That said, I would love to play a new SH game with the character described here. Looks like it would have lots of great opportunities.

Also, brief summaries of the game topics for anyone curious about the themes outside of "geometry faced bloke rapes busty nurse monsters":

SH1 - Car crash, daughter missing, go find her. Mostly just a horror story about cult stuff.
SH2 - The misogyny one. Also deals with self-loathing, misdirected anger, and unwanted sexual urges. Main character isn't supposed to be likeable.
SH3 - Coming of age story for the 17yo female protagonist, but with monsters. Has sexual themes, among lots of other elements, but nothing like in SH2. Possibly the best of the series.
SH4 - Focus on entrapment, escape, childhood, and rebirth. Also ghosts and serial killing.

Other developers made the rest, and they are a bit thematically messier. Often include "cool stuff" from previous games that doesn't make sense with the new stories, like any appearance of pyramid head or the nurse monsters.

Origins - Didn't play this one, haven't heard good things about it. Seems to be about childhood abuse and neglect?
Homecoming - Mostly about ancestral/cultural obligations and familial betrayal. Also in this one you're a supersoldier for some reason so it's never scary.
Shattered Memories - AU remake of SH1, told as a series of flashbacks. Big surprise, it's mostly about memory.
Downpour - Story about loss of a child, revenge, depression, and criminal justice.


A) Good luck getting a good SH game ever again
B) Silent Hill 3 had a female protag, she wasn't a fully grown woman but definitely female
ZeBirdMedic


I always thought the Silent Hill games focused too much on sexual themes, but it does in some ways define the games. It would be nice if the games had focused on other aspects too though.
Krimzon


I actually once had an idea of that, a woman who lost her child, during the operation she loses her ability to reproduce as well, which depressed her to such an extent that her husband could not tolerate her any longer, this in a sense that the woman just lost her mind and would just distance herself from him despite his efforts to comfort her.

In her personified guilt, the female monster is a towering woman with a horned helmet (horns are of metal, pulling away and then into the inside to represent the fallopian tubes and the helmet as the uterus), she has her belly and womb open and bloody, leaving a trail where she passes. She not so much attacks, but frustratingly tries to push the beings it finds inside its womb, with razor Sharp claws, in hopes of being able to conceive again.

Also, there is no hate of women in Silent Hill, I'm assuming you mean from Silent Hill 2, but in that game the women are represented as sexual frustrations of the main character, while Pyramid Head is his guilt. But that's way more complex then i make it out to be.
flyingbanana


Uuuu TBH I can't stand playing silent hill more than fifteen minutes, it was so tense, even more than resident evil. It feels like I have more limited, stiff movements in the game and that is terrifying, also most of the time we could only run, killing them would waste the weapon. It's like one of my worst nightmare.


@flyingbanana Call me crazy but I'm pretty sure that's the idea. It's a horror game, it's supposed to be scary.
MTTBrandLoser


I can agree that every game after the first one was fairly sexual, though it should be noted that in the second game it is wholly intentional and relates to that specific main character's psychological issues. It is the plot of that game and I can respect that if it happened just once. As mentioned by others though, it did go rapidly downhill from there, with each game having higher degrees of sexuality for no reason whatsoever until they just tacked "sexual frustration" on every. single. protagonist, just to get away with it. "He sees the 'sexy' nurses from the last game too? Why?" "Sexual frustration" "'Beast with two backs' monster? Pardon?" "Sexual. Frustration" It's gotten out of hand and I think it's what really killed the franchise and beat it further to death after. They really should have more female protags and less "ooh it's scary because tits but no face and like blood and stuff". What are you, Konami, brother Sweden? The male protagonists lack personality as well, but it may be intentional for the player to immerse themselves more into it. Hard to immerse yourself though when they put more effort into boob jiggle physics(unrealistic one at that) than creativity.

On the other hand, the series has inspired people(Whether from anger/disappointment at the series' direction or genuine enjoyment of the series/it's ideas), like you, Humon, to make their own monsters and tortured souls in more interesting and unique ways than just "Sexual jaded man loses someone he cares about(maybe) and is guilty I guess". One of my favorites is this one(http://bonelessnerd.tumblr.com/post/138042485156/whos-up-for-more-bogleech-prompted-silent-hill) which is about a woman who feels immense guilt at having worked for a PETA-esque company and enters a Silent Hill filled with distorted versions of animals she may have been involved with or seen in that job.
Elenorefangirl


O_O I could imagine a Transgender version of this with Pyramid-head representing either the main characters suppressed anger or hatred of Cisgender people,
Ichigo_Pan