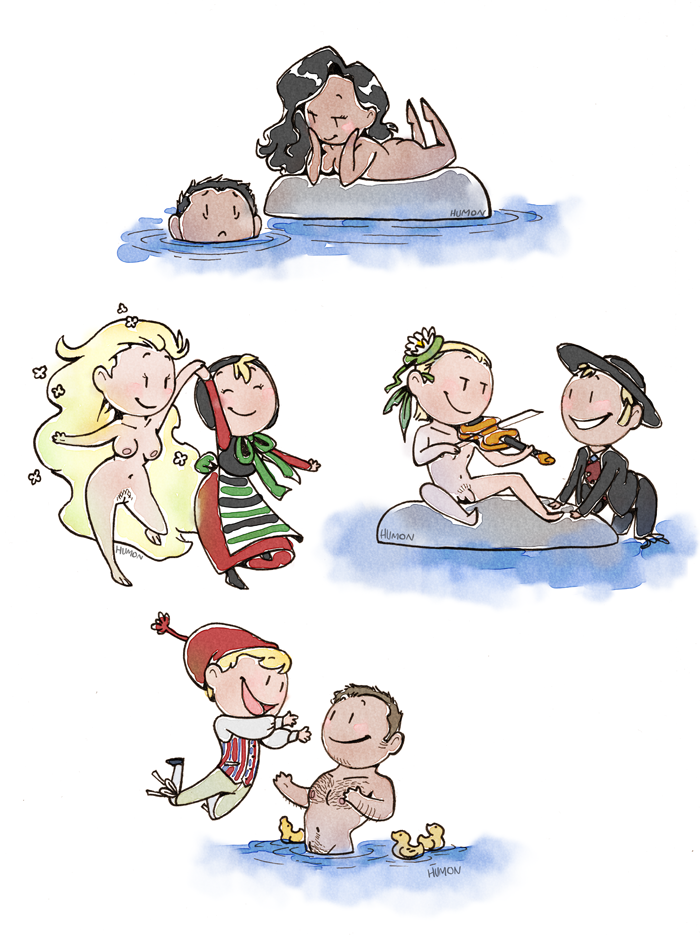 When I see people talk about how a character can't be lured by siren song because he is gay/asexual, I can't help but think "Since when I sexuality magical?"

I get why people like to do that though. It's to make something that people usually mock them for into something good and useful, so I don't think people should stop. It's just my folklore/myth heart that plays in. Sirens are said to have the ability to lure men with their magic song, so I'd imagine they can lure all men no matter their sexuality, while even the most lesbian of women won't feel the slightest pull.

Maybe it's just because I'm used to Scandinavian folklore where a person's sexuality has zero influence on magical creatures' ability to seduce them. It all comes down to what the creature prefers.

The nix and elves lure equal numbers of men and women, and the stream man will take anyone who walks by, but when he calls for someone it's always a man.

Mind you, all of these creatures usually kill their victims or make them go crazy.


As my username implies, I'm just butting in for a moment - as an asexual folklorist - to quibble over one point. At the risk of comparing asexuality to a disability, saying that having an incompatible orientation isn't just about ending mockery: most folklore came from times when the possibility that some poeople didn't do or want what everyone wanted. As you say Scandinavian creatures are supposed to be able to seduce regardless of orientation - so a gay or lesbain person used to using that as a defence elsewhere would be in trouble - but straight, gay and bi people all feel sexual attraction. To use the Siren metaphor: a jazz lover could be reeled in by an opera, even if they don't like opera, but someone who's not capable of appreciating music wouldn't. Asexuality, in this case, is the equivalent of being deaf - and while I'm more focused on Greek folklore in my studies, so I can't entirely account for Scandinavian folklore, Sirens (to keep with your example) are proven in myth to be unable to affect the deaf ...or just those with wax in their ears like the crew of Odysseus. The people who created and carried the myths didn't realise that everyone wants sex is a sweeping and incorrect generalisation, as most asexuals in the past had the choice of get married and pretend to like it or join a priesthood/nunnery requiring chastity, so a loophole remains.

That being said, I'm not trying to cause a fight and I respect your view on the matter (after all, there's no such thing as definite fact in folkloristics). It's a question of different (and equally acceptable) theories on how the magic 'works', but I've seen one too many internet forums where people take "magical creature x can seduce anyone" as an excuse to harrass asexuals and claim that they're "making it up to be special".

Good grief, I'm long winded today, aren't I? This is why I never normally comment.

Lastly, I just want you to know that althought I disagree with your view in this case, I have always admired your wonderful art and humour. It's always so awesome that I can't find anything to complain about.
NetherLordDwoll


I believe the Siren Song would pull in anyone who can hear it, no matter what their sexuality or gender. The song the sirens sing was mostly promises that they would tell Odysseus the future. They were also magical, but the real song has little to do with sexual seduction and such.
FH2ElectricBugalu

Personally, I'd think anyone with even a drop of testosterone (even women have some, and it fluxuates becoming greatest when she's most-fertile) is vulnerable.
justtellmeAll


seems your are contradicting yourself on http://humoncomics.com/nix-and-stream-man you mentioned a story about a women being called by the stream man.
WestofAragon


@Justbuttinginasec #9216628
Asexuality is very known and it always put us in weird situations and make feel maybe there is something wrong or missing with us--but it isn't so.
angelofdeath64


this reminds me of Boa Hancok from One Piece and her ability to seduce anyone regardless or sexuality.
unless they're Luffy or are in extreme pain.
Norwayisawesome


If you`ll ever get to drawing a norwegian national costume, maybe you could do the one from sunnmøre?


Was once in a danish national costume and I'm not going back in it without a struggle!