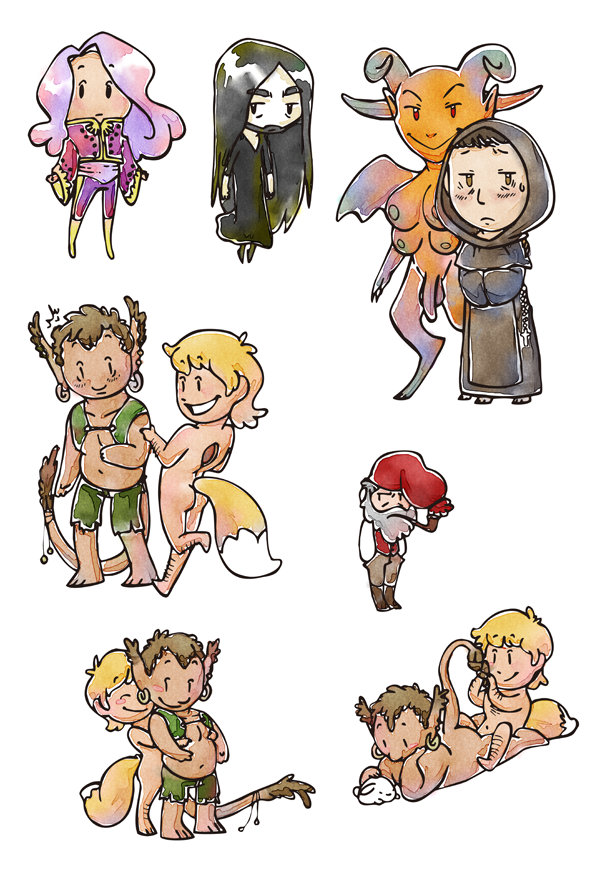 The two guys in the top left corner: Gods from a pantheon I've played around with. All the gods can change their bodies except the purple guy who can only change his hair and clothes, and as a result has become the most flamboyant to compensate. He is god of things that has to change to be constant, like the seasons, weather, aging, and even women's periods.
The other guy is the least colorful of the gods. He's god of all unpleasant things, like death, illness, torture, pain, sadness, and so on. He's not evil tough, just unfeeling, which is why he was tasked with these things.

Next to them is a monk and the demon who follows him around, usually disguised as another monk. I've been wanting to turn their story into a comic for ages, but I keep changing little things, so I'll probably never get done.

At the bottom is a troll and a huldrekarl from Scandinavian folklore. I just wanted to draw something that evening, and these two spontaneously ended up on the paper.


@angelofdeath64 Old comment is old but does the word "newhalf" really apply on a demon that most likely was created with all the equipment pre-installed so to speak? English isn't my native tongue so specific terminology is kind of tricky to me (more so when it's English words sprung from Japan) but I've had the impression that newhalf means either the male or the female half is a more recent acquisition. In other words a post-operation trans-person.


@Aryllia "Newhalf" Is a Japanese term and I recall it not literately meaning one half is new.
potatoe4life


wait... i'm confused.... wouldn't the Hades type god be the god of women's periods of he's the god of unpleasant things and torture?
WestofAragon


The troll looks like he slowly resigned that the huldra wasn't going to go away.
Koffeeguy


The second god reminded me of Rasputin...I don't know why because his hair wasn't like that.
Cakeofdoom


he god of all things gloomy reminds me of Conchita Wurst...
NetherLordDwoll