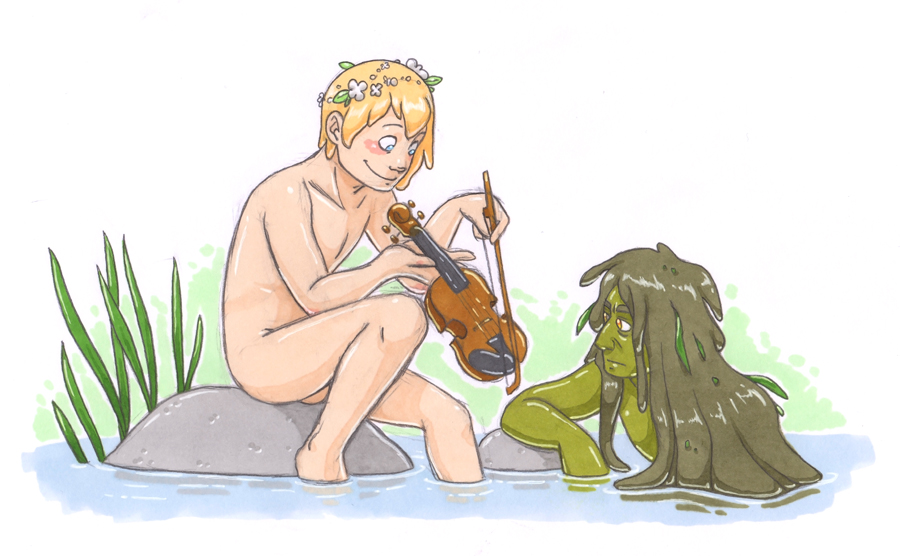 The Swedish and Norwegian Nix (again) with his Danish version, the Stream Man.

Unlike the Nix the Stream Man is rarely seen, and is almost always a disembodied voice coming from streams demanding a sacrifice, and then dragging a person into the water to drown them. If no one has drowned in the stream for a long time, he will shout "It is time!" and a man will come running to the stream and throw himself in, no matter how many people try to hold him back.

One story tells of a young woman who was out walking her dog when the Steam Man demanded a sacrifice. She felt the force pull at her and picked up the dog and threw it in the water. Immediately the force let go of her, and she quickly ran home.

The few times the Stream Man has been depicted he is usually a dark creature with glowing eyes.


"If you don't like my music, you try it yourself."


I like the stream man more then the nix.
Axolive


@Juolukka I'm pretty certain it is the same character that was brought from Sweden to Finland, here it is called Näcken and Näkki seems like a Finnish version of the name


@Darakna We have something very very similar and we call it the "Water Man" (Vodník), but I guess that's understandable as I'm from Slovakia

I imagine all Slavic cultures have their own variations.

Although our Vodník isn't that "dark", most of his victims die because of his mischief.
Juolukka


I thinks this someway related to our Näkki :p
pisio


Remembers me of the lovercraftian "god" Dagon in his concept
BetweenTwoOceans


It reminds me, a little, of "El Moan" a creature of the colombian (maybe other countries aswell, i don't know) folklore; he's a hairy man that lives in water bodies and would come to the surface to demand tobacco (and/or something else i forgot), if remember correctly, if you comply he'll let you alone.
Darakna


Hmmm ... I think your Stream Man exists in our stories as well. We call him River Man, but it's basically the same thing.
Our national poet however (our hymn is from one of his songs) wrote a great poem/song about the River Man.
The poet himself used his crush (who didn't acknowledge him) in the song, telling us how she went to the Sunday ball and didn't want to dance with anybody coz she thought they were all bellow her, until River Man came and charmed her. But once they started dancing, he didn't let them stop until they danced right into the river ... and she was never seen again.