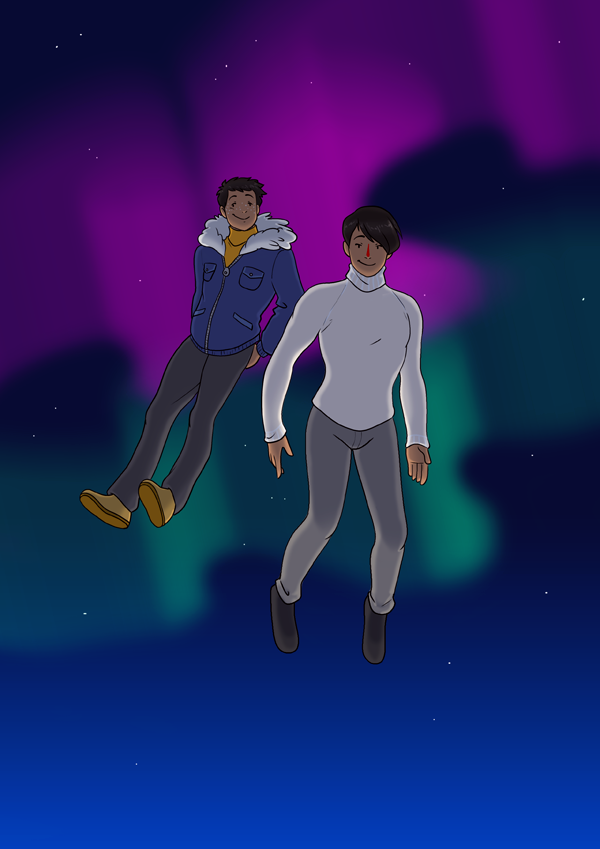 Probably one of my more silly ideas.

Four winters ago I was listening to Carol of The Bells and started imagining seven people floating along the ground and up into the air. That lead to the idea of Santa's reindeer actually being humans who had the ability to fly and turn into reindeer.

I considered adding more reindeer markings on them, but decided against it. I sort of imagined there to be a whole story where it wasn't obvious that they were Santa's reindeer. Basically, it was supposed to be a story with Christmas elements, not a Christmas story.


My sister-in-law was a teacher up in the Indian reservation of Split Lake, Manitoba for a time.
Their story around the northern lights simply defines them as a 'soccer game' being played by the spirits.

According to the legend, if you whistle while watching them, the lights will assume that you wish to be part of the fun and come down to scoop you up and carry you off into the spirit world to join in. However if you change your mind, before this happens you can clap your hands and they will realise you are just an enthusiastic spectator and leave you be.


Consider though, that regardless of the stories, by the Winter Solstice male reindeer have lost their antlers. All of Santa's reindeer are therefore female. Gives a whole twist to the story.


You've been a drawing machine recently; it's great, don't get me wrong, but I just wonder what gave you that artist's lightning.


The whole concept sounds delightful. You put me racing thinking what these guys would be doing in the story. No I have to check Santa Claus lore to learn if any of the reindeer has ever been attributed charateristics or personality.
Add comment: Please Sign in or create an accout to comment.