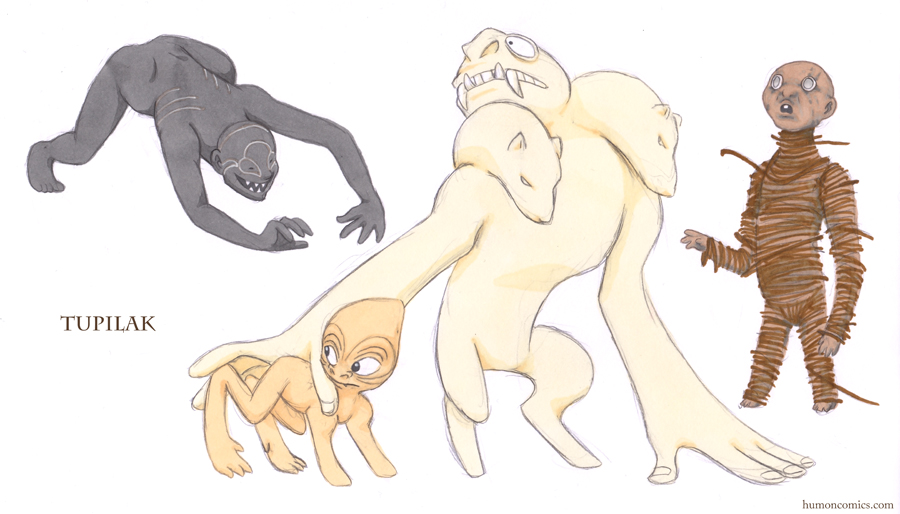 They were magic creatures created to kill a specific person. The first were made from parts of animals and children. Non of these have ever been found because they were thrown into the sea to find their victim (They were dangerous to make though, because if the victim had stronger magical powers the tupilak would return and kill it's creator instead)

Later ones were made from wood that had been painted black, and often had parts from real animals or children in them, such as claws, teeth or eyes.

And finally there's the white tupilaks made from bone or stone. They were never meant to hurt anyone, but are simply meant for decoration, or even protection.

I like to think there's a story in here somewhere about the old tupilaks trying to sneak into a town and the new ones trying to keep them out.


tbh i actually really like all of them besides the one on the far right, which is scary as FUCK, and the story idea! i also really like how the big white one looks like its protecting &/or hurrying the smaller one, which actually looks pretty cute, away from the two others. I also like how happy the black one actually looks, and that it looks like it jumped up and is about to land on one of the white ones and tickle it/ them.
AgProv


Interestingly, tibet, possibly as far from Greenland as you can get, has a concept called the Tulpa. almost a tupilak and very similar.


hmm the one to the left looks like a well man is it just me or no :P
ju44


"I like to think there's a story in here somewhere about the old tupilaks trying to sneak into a town and the new ones trying to keep them out."

I'm sure you can find it.


They're terrifying. Especially the one on the right end, it reminds me o a dead child 0-0


@BunnyFitzgerald i think it actually is since "The first were made from parts of animals and children" so..... that's........ some thing
Qivittoq


Frankly my dear, they kinda are.
I know this might sound silly, I'm Greenlandic and I'll never own one in my life and I'll never want one in my house. To many stories around them. I don't care if they are new or old, they are still tupilaks to me. Beings made for fulfilling curses.
Tannamarie