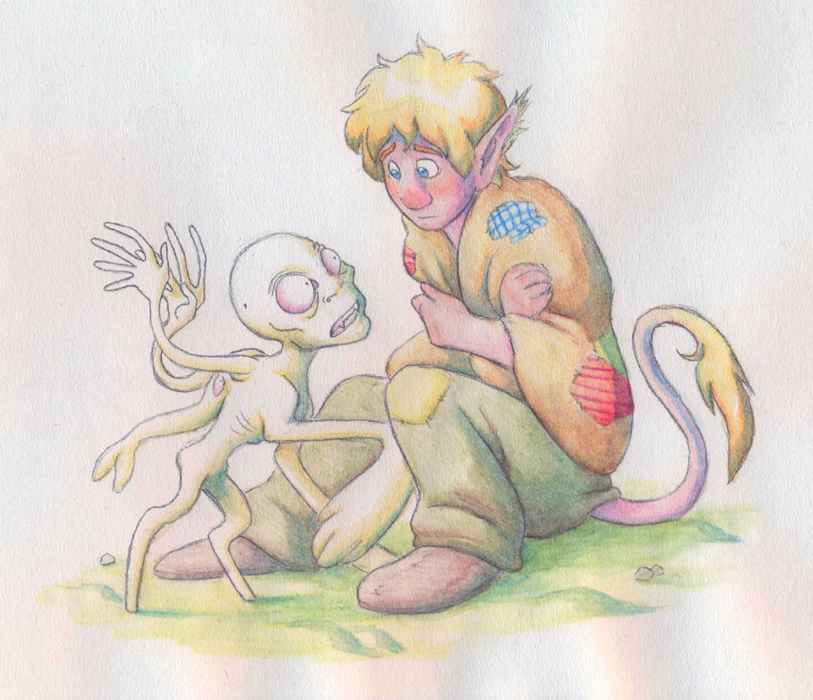 A tupilak is a creature/spirit from Greenland. They were made by shamans (and occasionally anyone else who knew how to do it) and only had one purpose in life: To kill their makers worst enemy. They were made from the remains of animals and humans, and where then placed in the water so they could swim out and find their target. They could swim and walk on land (and if they had wings, fly) and always looked as grotesque as possible so they could strike fear in their victim.

Today a tupilak is a small figurine made from either tree, whale bone or reindeer antlers, and are used as talismans that will protect it’s owner and harm his/her enemies.

As a child I always wondered what happened to a tupilak when it had killed it’s victim. That was all it was made for, so what did it have to do after that? Did it just die? I imagined how hundreds of tupilaks just walked aimlessly around Greenland without purpose.

That inspired this picture. A troll have somehow ended up on Greenland. He is cold, hungry, and has just met a tupilak. It just wants to cuddle for warmth, but he’s not sure that’s a good idea.


@DanishAmerican123 looks more like a mix between Denmark and Norway, with a tail
FH2ElectricBugalu


Aww, poor little thing. D: Hes just lonely and cold. Not his fault he was made to look scary.
I really like your idea about them being abandoned and just wandering around.
AgProv


Hmm. The tupilac looks like the classic Greys from UFO contact lore. I wonder if they've adapted their approach for a new generation?
Orchrist


Concerning the future fate of an avenging tulipak, maybe 'Spud - The Disposible Assassin' could make a colourful suggestion? :o)
Demony666


There are actually 2 different kinds. There's the Tupilak that Humon descripes and the Dupilaks; these were supposed to be the opposite from Tupilaks.
Demony666


There are actually 2 different kinds. There's the Tupilak that Humon descripes and the Dupilaks; these were supposed to be the opposite from Tupilaks.
DeletedAccount


Haha nice. I think the Troll should reconsider, unless he is the target cuddling should be fine right? ;)
Add comment: Please Sign in or create an accout to comment.