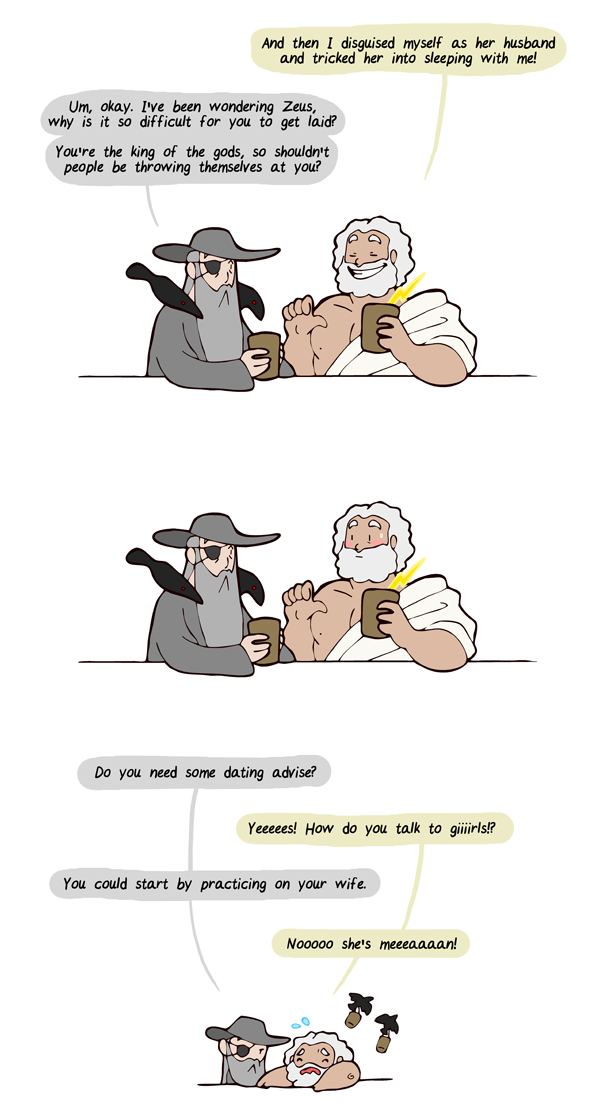 Step up your game

Why is it so difficult for Zeus to get laid?

Mind you, Odin also forced himself on the Jotun woman Rind, but he was punished for it by the other gods and banished from Valhalla, and got replaced with the god Uller. Odin suffered terribly both physically and mentally, until 10 years later the other gods decided he could come back. He never tried something like that again.
He did however have plenty of consensual sex, and it even happened a few times that he wasn't really in the mood, but had sex with women anyway because they had heard how good he was in bed. Also, he slept with a ton of men as a woman himself and had plenty of human/god babies that way. Odin was busy.


The reason Zeus tricks women into sleeping with him is because a mortal can't look at an undisguised god without dying. It's how Dionysus's mother, Semele, died. He can still tell lovers he's Zeus, but he can't prove that unless he reveals himself, so it's easier to just not bring it up.


@cutest_blood_disease well actually Zeus has to trick 'em because his wife, Hera, almost always sets her wrath on them and Zeus's children, and lemme tell you, you do NOT want that to happen to you. :P
Nedalin


Love how the ravens decide to take their drinks elsewhere. ^^
borgpot


Did you draw Hera yet? Hera Boöpis, the cow-eyed... I am ever so intrigued. ;)
ZanarNaryon


You don't mess around with sexual assault in Asgard
Jake_Rondeau


I think it would have been better if it was Thor with Zeus... I mean, They're both lightning and thunder gods. and from a mythological point of view, Odian is more like Chronos than Zeus. Love the comic anyway.
potatoe4life


well, i mean, 1, you promised Hera she would be your queen, and you wouldn't cheat on her, so of course she's obviously pissed, and 2, she sets her wrath (usually) on both your children, and the women you *ahem* slept with (besides Perseus and his mom and perhaps another one or two kid or mom), so it's no wonder most if not all women didn't really want to get laid by you, because it is NOT good when Hera is angry at you, and that you'd probably suffer a WHOLE lot less if you were to jut kill your self, even if your still pregnant, (it'd technically prevent the kid from a whole life of suffer from Hera, so it'd actually be a lot more merciful) and third, you do need practice talking to girls. Might i add, Odin, it seems to be the same thing with you. (it's just you can turn into a female, and your wife doesn't make the people suffer, both things Zeus doesn't have or cant do
LadySmurdis

Maybe she wouldn't be mean if you'd wear a chastity belt every once in a while.
Topazgirl9


A reason why Zeus disguised himself as animals and stuff was so Hera wouldn’t catch her unfaithful husband cheating on her. Seriously. He just keep the thing in his pants. Half of the problems in Greek mythology are cuz Zeus decided to shag someone besides his wife.
FloriFlorensen


didn't notice the raven's action at first - details like that are a big part of why I love these comics so much!