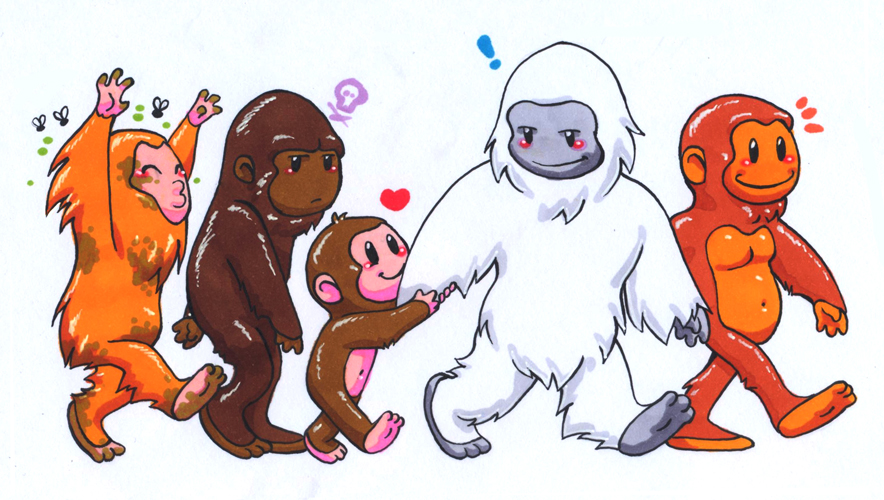 Found this old drawing of the most famous mysterious apes around the world that I did some time ago. I haven't had much time to draw this week so I thought I might as well post it.

From left to right:

Skunk Ape
Said to live in southern states of USA. All the mysterious apes are said to smell bad, but non as bad as the Skunk Ape who apparently smells like "a skunk that had a fight with a dumpster".

Big Foot
Probably the most famous of all the mysterious apes. Lives in the northern parts of USA and was first described by the Native Americans.

Orang Pendek
A very short little guy from Sumatra. This one is actually being taken serious by scientists and there's even groups who tries to preserve the areas it is said to live in because it's believed to be an as-of-yet unknown ape species.

Yeti
The next most famous of the group. Lives in Himalaya and therefore the most mysterious because of the harsh conditions, not to mention it's relationship with monks and old scrolls.

Yowie
Rather funny looking creature from Australia with a big stomach and long thin legs. The aboriginals were the first to tell stories about it, and while it is said to be pretty shy (and even silly) most of the time, it has attacked more people than the rest of the group.


The yeti is not white, its black or dark brown.The idea of the yeti having white hair comes from a mistranslation of the sino-tibetan name 'metoh-kangmi' meaning abominable man of the rocks. It was mistranslated as abominable man of the snows. Yetis live below the snow line in the forests. The name yeti itself 'rock-beast'.
Interestingly Lars Thomas of Copenhagen University has researched early troll legends and the descriptions of them match up with modern descriptions of the almasty, a man-like creature reported from the mountains of Russia and possibly an early offshoot of Homo erectus or Homo habilis.
mojojojo


So is the Yowie a marsupial ape?
PurplePlum


I'm sure I heard a Yowie once while camping....
GelibeanH20


Where I live, Big Foots (or Sasquatches) are called K!a’waq!a (Klakla) and is said to steal children who don't listen to their parents and throw them in the giant cedar-woven basket she carries on her back, which is rimmed with spikes.
DreamingBlackLeo


@FinnMacCool XD I just read the picture thing there and I can't help but think about Hetalia. Oh what that show does to the brain.~
"There's a reason Australia is a water-locked continent: Geography is trying to protect you." And I thought I would have liked to live there. Pfft >_>
FinnMacCool


Of *course* the Yowie has attacked more people than the others. It's in Australia. :-)
DeletedAccount


Most specifically, Bigfoot is largely considered to live in Washington State, USA, my state