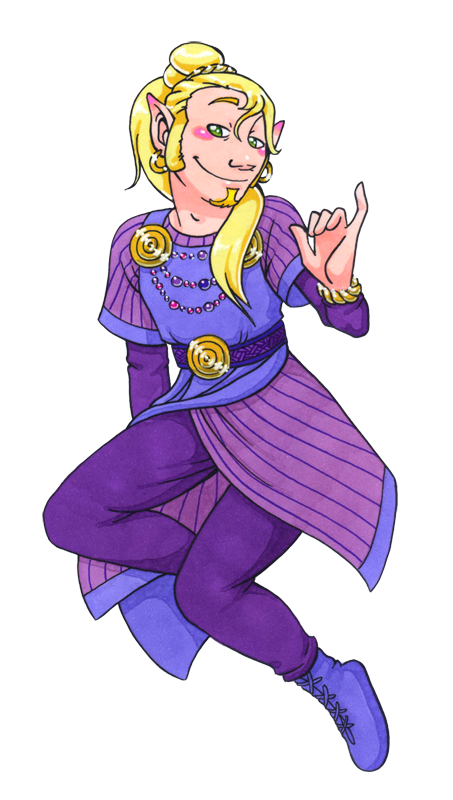 This was supposed to be a quick silly drawing, but I ended up putting a lot more thought into it than I intended.
First of, as I've said many times, I hate the English word for Ice Giants in Nordic mythology because not all were giants an not all were associated with ice. So I'll use the Norse word jotunn.
Over the years I've been drawing them more and more feminine, and here's a long explanation why.

Because we live in a very Jewish/Christian/Islamic inspired world we tend to think that other religions divide the world into good and evil as well, but this is most certainly not true, especially for the old religions. The Norse people saw the world as a battle between nature/chaos/female and culture/order/male, and neither were seen as good or evil, though the Vikings preferred culture. Jotunns represented nature and the feminine, the gods represented culture and the masculine.
The jotunns were the oldest race in the world, older than the gods, because nature is older than culture, and a lot of the old stories are about the gods stealing things or knowledge from the jotunns, just like humans take things from nature to build tools, weapons, and houses.
Even Ragnarök symbolized how culture will end and nature will once again take over (as well as the jotunns taking revenge for the gods committing the first murder in history when they killed the first jotunn Ymir to use his body to create the world)

People tend to only remember the "powerful nature forces" aspect of jotunns because it has become popular to think of them as huge monsters, but the female connection was also very important. This is why Loki, who was part jotunn, is so keen on turning into female beings and giving birth, be it as a woman or a horse. Even Odin who was a god but spend a lot of time with jotunns preformed female magic and often turned into a woman himself (at least according to Loki).
So Ragnarök also symbolize how a man's strength is nothing compared to a woman's wrath. No, that is not man-hating. The vikings took angry women very seriously. When the goddess of love got angry the whole world shook and the other gods ran for cover.

So because of all that I've started putting jotunns in very female inspired clothes, giving them feminine hairstyles and so on. That is just my head-canon though.


An interesting archaeological fact to go with that is that scientists generally find it more difficult to assign a gender to Norse skeletons than, say, British or Roman ones, and have to primarily go through grave goods unless they can sample some DNA (which is why that one large graveyard in Britain they re-examined in 2016 that was filled with, according to the weapons, Norse warriors, came as a surprise when almost half of the skeletons they managed to assign a gender to were actually female). And the reason for that is that the Viking Age Norse men, as opposed to the general facial structure today, had finer, more delicate features than we would nowadays expect, and the women larger, more robust features.

And that makes the facial structures of the men and women far more similar than we are used to seeing these days; the men *did* look more "feminine" and the women more "masculine" to our modern eyes.

So this works on a practical, scientific (so far as using science to depict jotunns goes) level, as well as a metaphorical one.
Hrefna96


technically when Odin and his brothers killed ymir they weren't gods they were just extremely powerful jotuns, its debatable what happened to Odins brothers afterwords, if they all became one or if his brothers just went away, after it Odin created the gods but he him self was still a jotun.
FH2ElectricBugalu


Jotunn it is, then.


You say the vikings preferred culture? Would that not imply that they preferred the masculine too? I mean, I was under the impression, and you've pointed it out here too, that Vikings had a healthy respect for women. Or was it just that? Just respect?
DeletedAccount


Lovely pic! I really need to keep this in mind when I'm writing Norse-inspired material.
YokoGreyword


I love it. Sure he COULD be a chick if he felt like it, but he's decided to be a dude today. Live with it.


wow, you taught me something when i am on a break from collegeXD thnx for all the info of the jotunn.
DeletedAccount


And, a question: How would you portray a female Jotunn, considering Thor was accepted by them as female despite being usually portrayed as being hyper-masculine?
DeletedAccount


Interesting, and makes sense. Many mythologies I have read have a male order supplanting a female chaos (Apollo and the serpent, for instance). I had not made the association, because, in the main, the English-speaking world equates the Norse with chaos. This, regardless of the great debt owed to the Norse world for a major part of the foundations of our law, custom and culture. Y'know, cause the Vikings were SCARY. (You should do a SatW about it).
DeletedAccount


Your drawing of a jotunn is lovely. And thank you for the explanation. I have looked for a book that explains the Nordic religion, telling the stories as well, for quite a while. None I have found have given such a concise and clear explanation as you have done. I come for the entertainment, but I stay for the education. Thank you.
Add comment: Please Sign in or create an accout to comment.