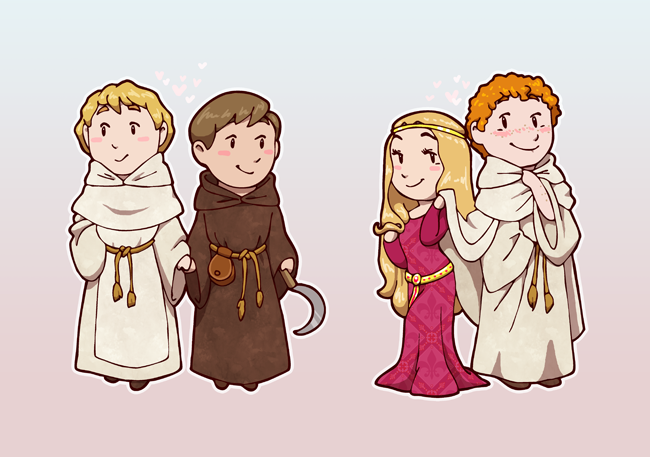 A closed down monastery nearby was open for people to come take a look, and I quietly joined a guided tour. Between stops the guide would tell stories about all the trouble the monks kept getting themselves into. These were my two favorites.

At one point a monk and a lay Brother (Men who had taken some vows but not all, and spent more time doing manual work than reading and writing. They dressed in brown robes, weren't expected to join in all the prayers and some orders allowed them to marry and have kids) were caught having an affair. They were both sentenced to get one whip lash from each monk and lay Brother, but oddly enough they weren't separated. The abbot just told them "Stop that" and that was it. As the guide said "They probably just continued their affair but got better at hiding it"

Another time a lord had a mistress he was very fond of, but he was terribly worried she might cheat on him, so he sent her to the monastery, thinking the chaste monks would never touch her. But the lord didn't visit her much so of course she got bored, and eventually started an affair with a young handsome monk. When the lord found out, people where whipped left and right, and the woman was sent off to live in the country.

Perhaps that was the point.
Emrys


I like to imagine that both stories happened simultaneously, and all 4 knew each other.
AwfulLawful


Abbot: "Stop that" as in stop getting caught because you're making us look bad.
GXUNIVERSE


I ever went to budhist temple in thailand and saw all the monks there using iphone.. I was like.. Wow..so cool..
LavaMadness


You seem to be really into affairs. >~<
Zeust


Is it just me or does the lady look like princess Zelda?
frank0ys


Put glasses on the princess and her paramour, and they look like my daughter and her girlfriend.