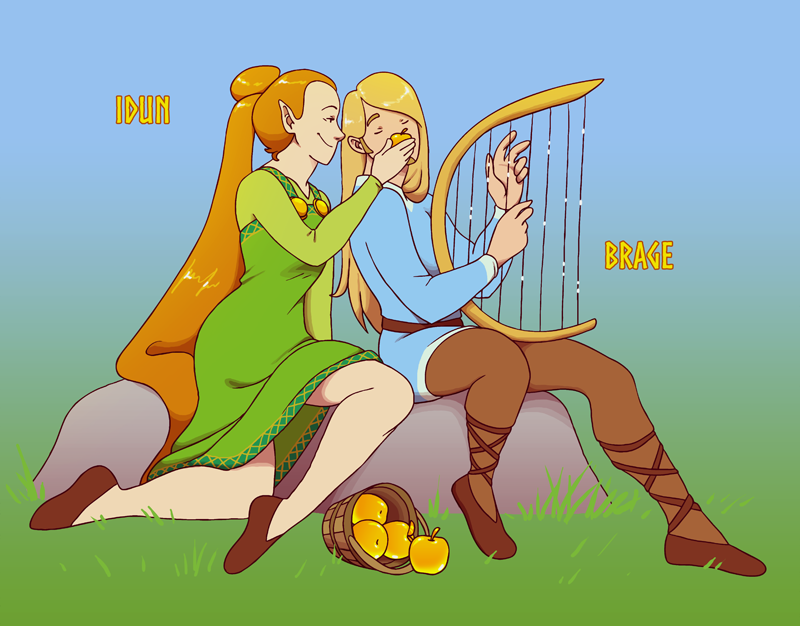 Idun and Brage are an odd pair of gods from Norse mythology.

Idun is the most legit of the two. She is mentioned as being the goddess in charge of the golden apples that keep the other gods young, though one text suggest she might be keeping them young simply by living in Asgard. She is supposedly also quite fond of sex. Freya is often assumed to be the most promiscuous of the goddesses, but according to Loki Idun is far more active on that scene. One of her names even means “mistress/lover of the gods” so it would seem she got around.

Scholars aren’t quite sure what she even is. There’s some suggestion she might be one of the Vanir (same tribe as Freya and Freyr) because Freyr has some golden apples of his own in one story. Vanir and elves are also closely connected, so some think Idun might be an elf because there’s a whole story surrounding why Freya and Freyr lives in Asgard that would make it kinda weird for Idun to live there too if she’s a Vanir. Elves were seen as lesser nature gods so it would still make her a legit god.

Brage’s claim to fame as a god is less legit. He is often cited as being god of music and poetry, but nowhere in the old texts is he actually called a god and there’s evidence of real humans going by the same name. It was unheard of for humans to be named after gods, so it seems likely that Brage despite being the son of Odin wasn’t a god himself. He was just a human who lived in Asgard because his wife and father were gods. That would also explain why he apparently was quite the coward in battle. He was just a puny human going up against gods. (Then again he might have been a really good poet who was made a god by later people, but I think my version is more fun)

And don’t worry about the whole “Idun sleeping with every man she sees” thing. Vikings didn’t expect people to stay faithful to their spouse (no, not even the women), so Brage probably wasn’t torn up about it. And she clearly loved him as she tried to defend his honor when Loki mocked him for being a coward.


In Hrafnagaldur Odins, Idun is called Ivaldsdottir, which would make her a dwarf. I always liked that theory, because dwarfs in Norse mythology are the people who create magical items for the gods, and growing golden apples of eternal youth is about as magical as can get.
FrankHarr

And it's not at all unheard of for IE speakers to promote a person to godhood.

Interestingly, if you choose to not get hung up on the term "god" you can figure that that there are all sorts of divine beings from full gods to embodiments of nature to divine manifestations of some place or other. There's a lot out there.
docterzero


Hey there, long time fan of your stuff, and I dunno if you're a gamer but check this out: https://www.humblebundle.com/store/vikings-wolves-of-midgard

I picked it up from the Humble Store yesterday because it's on sale and I thought you might get a kick out of it because there's a ton and a half of stuff relating to the Aesir and so on in it. Your character class is actually what god you follow and the gifts they give you, all the accessories are their relics (infact, my magic user currently has "Brage's Harp" equipped,) and so on.

Its super cheap right now, at least in the US. Dunno if it's available where you are or not, but if it is you might wanna give it a look.


Idun is an awesome godess :P mostly because I am named after her, but I still like her since the story about Loke "rescuing" Idun by turning her into a nut, after tricking her to begin with is the story that got me intrested in mythology
Add comment: Please Sign in or create an accout to comment.