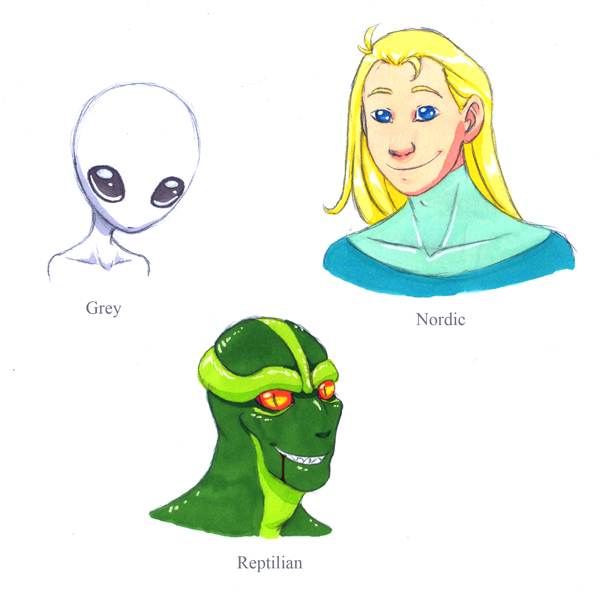 I've always liked stories about aliens, and as a tween I made a science fiction story about the main three species. Recently I found the old story, dusted it off, and "rewrote" it in my head.

Nordics got their name because originally they were only seen in Nordic countries, and of course because of their long blond hair and blue eyes. They abduct people, but only to give them knowledge or warn them of upcoming natural disasters, and it's always described by the human as a wonderful experience. Women are extremely rare in their species, and while they don't receive special treatment in their younger years, they are later given important and powerful jobs because their physic abilities are very strong.
In my story they're the main characters, and while most of them are gentle and loving, some have chosen to leave their own kind to work with either the greys or reptilians.

Greys are sexless, emotionless scientists. They abduct more people than any other race, and while they have no intentions of hurting anyone, neither do they understand human emotions and end up causing their victims tremendous pain both physically and mentally. They will try to tell humans not to be afraid when they take them, but their voices are so emotionless that it often ends up frightening the human even more. In the story they're neutral to humanity's fate and only want to study us and preserve our DNA in case we should all die. They have a strong interest in human emotions and try to create hybrids.

Reptilians are by far the nastiest of aliens, seen through human eyes. They are very passionate about everything they do, and they love nothing more than politics and drama. Toying with humans just to get a reaction is a favorite pastime of theirs, though other alien races might also fall victim to this. Their favorite snack is human blood, so the meanest will have humans as a sort of cattle, while the gentler members of the race will find willing victims. Like the Nordics they're not all the same, and some try to help humans instead of manipulating them. They're the only race that has shapeshifting abilities and can disguise themselves as humans.

None of these guys in the picture are actual characters from the story, but rather concepts to give me an idea of what each race looks like.


nordics are good, the reptilians are bad and the greys are... in the grey
angelofdeath64


you should do an archive of all the the creatures and characters you put in your comics. unless you already do which in that case would anybody mind tagging me with a link to it?
angelofdeath64


@Nimbo343 I LOVE TRYING HUMAN.
.... even if it creeps me out a little, sometimes.
dnaivnae


So do you, by any chance, read IntroducingEmy's webcomic "Trying Human"? <.<
rajawarrior911