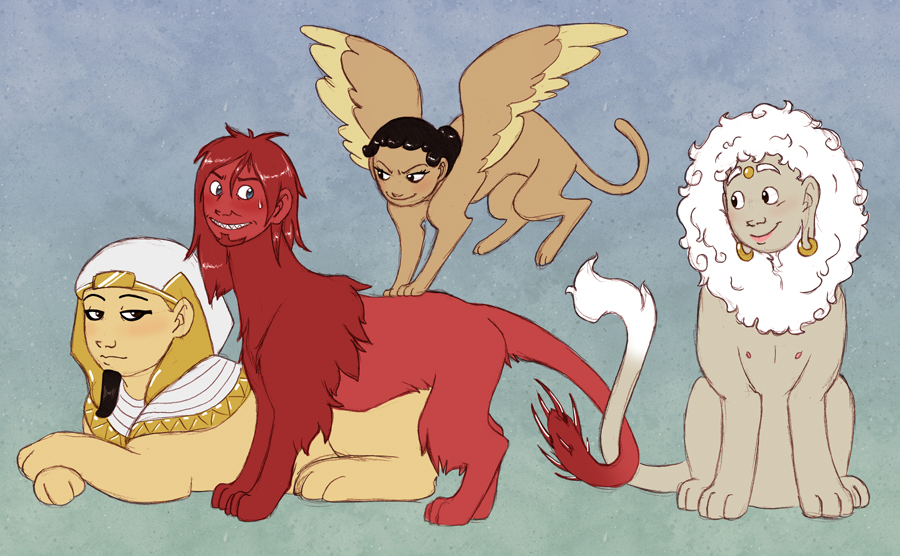 Them redheads, you know. Who runs off with the price?

Manticore (the red one) is not usually considered a sphinx, but it fits the criteria: a lion with the head of a human.
There are no real stories about them because people just kept copying the same text, so it doesn't change much either. Said to love the taste of humans, unable to kill elephants, and fight "the headless people"."

On the left we have the Egyptian sphinx. They are usually male, but females do exist. They must be the most chill of the sphinxes because they're always portrayed in a relaxed position.

Next to him is the Greek sphinx. They're usually female, though they could also be male in older art. They are quite violent and most art portray them attacking men or watching them rest.

And finally an Indian sphinx, also known as a purushamriga. They come in both male and female, often as a pair, and both with a human chest. They're very peaceful, always smiling, and always willing to help.

I wanted to add a more sphinxes but sadly I ran out of space on the paper.


I didn't know there were other types of Sphinxes!!! Please do draw more!!!!! <3
potatoe4life


Shoulda drawn the Egyptian sphynx without a nose though tbh.
Luci


The egyptian sphinx looks like he'd be awesome to hang with. He'd probably drop some ancient and forgotten knowledge on yo ass in regular conversation XD
DeletedAccount