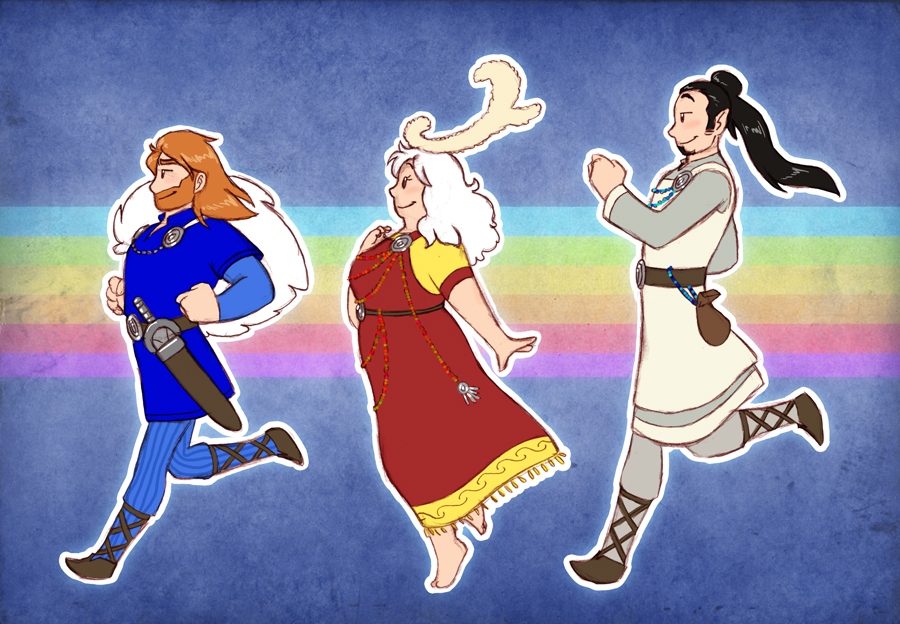 Gods on the run

Random Æsir god, Vanir goddess, and Jotun. They're not supposed to look like any specific people from the Eddas.

This is not meant to be an illustration of how they are usually portrayed, but simply how they look in my mind after having read about the old Norse religion and the many speculations surrounding it.

The Æsir represent culture, tamed nature, order, and the male sex. They were at the very top of the godly hierarchy, so I put him in blue which was the color of the rich because it was very expensive to make.

We know very little about the Vanir, but because the only Vanir with any significant roles in the Eddas are fertility gods, they are considered to be connected with fertility. This is why I have started drawing them more or less plump because classic fertility statues are often depicted so.
It used to be a common belief that they represented an older religion, but that has since been dismissed by most experts. Still the idea lingered with me, so I tend to portray them more shamanic looking.

Finally a Jotun. Even though they were the oldest and wisest of the races, they were the lowest in the hierarchy, which is why I have given him clothes with the lightest colors. In Viking culture you could tell a person's place in the social hierarchy by how dark their clothes were, from the rich blue, to the slaves' white.
Jotuns represented chaos, wild nature, magic, and the female sex. Their roles as chaos and femininity gods can be seen by how male Jotuns were able to give birth. The first jotun Ymir gave birth in his sleep, Loki birthed quite a few children (most as a woman, but also as a man), and Odin who was king of the Æsir but originally a Jotun himself, also birthed children in the form of a woman.
Men with the ability to shapeshift into women was a special Jotun ability.

The rainbow in the background is of course Bifrost, the bridge that connected the worlds.


@YokoGreyword
I think you should draw Loki in red. It's a color who fits with everything he stands for, and he look good in it ;)
YokoGreyword


Hey, I'm drawing a picture of Loki and Sigyn back in earlier days and I don't know what color to put Loki in. He's a jotunn, but he's also Odin's blood-brother and the Vanir seem to treat him like he's an important visitor because of that. It doesn't help that Loki's so fickle that the best answer I'd get if I could ask him directly would be a snarky "guess". ;)
Help?
EricTheRedAndWhite


I learn more from your comics than in history class sometimes. xD At least it feels like it.

I think all your followers have thought that at one point though.
MannBabe