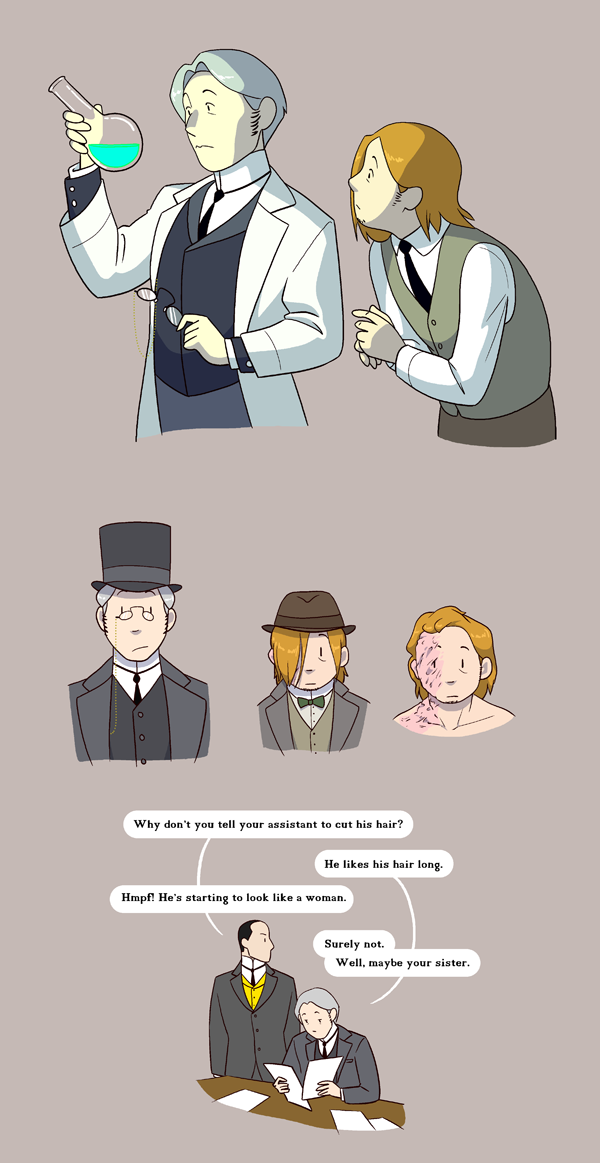 Many many years ago I tried writing a classic mad scientist story, monster, deformed assistant and all.

It was simple enough. Doctor Griffin Waller was hired by a wealthy man to help him walk again which he accomplished with a combination of drugs and an exoskeleton of sorts. The drugs eventually made the man go mad and mayhem ensured.

I never really liked the story though. It annoyed me how “Hollywood” it was. The only part I really liked was the relationship between Dr. Waller and his Scottish assistant, Cailean.

Many years ago Waller wanted to invent something to help burn victims heal and asked all factory owners to send any victims they might get his way. The “lucky” patient turned out to be Cailean who was rushed to Dr. Waller who started experimenting on him (He didn’t torture Cailean though. Cailean lived in the mansion and was free to leave. He stayed because he hoped it would help). After several months of pain from having ointments smeared directly on his open wounds and the infection that followed, Cailean healed up worse than he probably would have if his body had been left to do it’s own thing. However, he had been so good at following instructions and explaining what was happening to him that Dr. Waller offered him a job as his assistant. Besides the shitty medical treatment Dr. Waller had been incredibly nice to him so Cailean took the job. He knew no one else would want to hire him now anyway.

He soon learned just how much his new looks disgusted other people and let his hair grow long to hide it and started walking a bit hunched over hoping people wouldn’t notice him. The only person who never showed any disgust was Dr. Waller who even mocked others people for being afraid of Cailean, so Cailean developed a rather strong affection for him.

Throughout the story his main concern was to protect Dr. Waller from harm. I imagined their relationship to be sorta romantic in nature but not sexual at all.

Oh well, maybe some day I will come up with a proper story for them.


There's your monster story. Cailean is very - VERY - protective of Dr. Waller, much more so than Waller is aware. Waller's zeal, eccentricities, and open disdain of other "authorities" in his field has made him the target of professional scorn. Perhaps it started with Cailean discovering a plot by a rival to sabotage one of Waller's projects. Cailean is a strong and hearty man, having grown up working in the factories moving heavy boxes and barrels. He manages to remove the threat (by destroying the rival's lab? by killing the rival?), and his crime is never traced back to him. From this early success, he takes it upon himself to protect Waller from anything that he perceives as a threat to his employer. And as that perception of threat gets more and more sensitive, his obsession grows to the point of paranoia; and his ways of neutralizing those perceived threats get more and more savage. All of his criminal activity splashes excitedly across the tabloid papers, but Cailean carefully keeps Waller unaware of everything he has done "for him". Until the story needs to resolve, of course.


@BethMit while i do like your idea, Humon said that "I never really liked the story though. It annoyed me how “Hollywood” it was" and your idea might be a bit to "Hollywood" especially since, as you said, it's "A little bit Frankenstein, a little bit Dr. Jekyll and Mr. Hyde, a little bit Pygmalion, and lots of hubris." (i posted a reply like this to a few others, but still. good idea :>)
dana0120


An idea i sorta came up with though is that perhaps Waller falls in love with a lady (ima just call her Mildred. can change it later), and they eventually get married, and she moves into his house. She acts all nice and what not to Cailean around Waller, but when hes not around, she acts rather rude, mean, and downright disgusted by Cailean. But Cailean doesn't have the heart to tell Waller (who seems to have been "blinded by love" and thinks that the rude stuff she does & says might be something, or to someone, else) how much of a bitch Mildred really is. Cailean also notices that she's a bit rude to Waller himself, who as mentioned before, is "love blind" and eventually, he (Caileen) over hears her talking to one of her friends, (via an old phone, or just talking with her) and learns that she never even liked Waller, and only wanted the money (whether she finds out Waller wasn't actually that rich, or that he is indeed rich, is up to you) and plans on "disposing" him and "his little butler" very soon. This makes Cailean decide he should finally tell Waller the truth, but Waller refuses to believe that, and says that Cailean is "just jealous" Cailean tries to tell him again, but Waller (who hasnt gotten much sleep in the past few days due to projects hes been working on and his nagging wife) gets quite mad and says once more hes jealous, and an eavesdropper, as well as a few other things, and they eventually start arguing (Mildred might join their argument later) until Waller snaps, and says something like: "PERHAPS I SHOULD OF JUST LET YOU DIE, YOU UGLY BEAST", only to instantly regret it, but the damage has been done. Cailean, now greatly offended says some thing maybe like: "FINE THEN, IF I ANNOY YOU SO MUCH THEN I'LL LEAVE" and does so. A few days later, Waller gets depressed, because of his sleep deprivation, but mainly because he really misses, & feels really guilty about what he said to Caileen, who is living on the streets since no else would hire him, and misses Waller as well, regretting what he had said to him. (thus making Cailean depressed as well) Mildred obviously doesn't care about any of this, and is actually quite pleased since it'd make getting rid of Waller much easier. then later, (as in maybe a week or so later) she's about to leave the house to visit one of her friends when her husband asks her that if she sees Cailean, "tell him that i'm sorry. and please tell me what he said" A bit annoyed by this, shes about to tell him "AUGH! Must I do all the work around here?" but stops, and realizes she could say some thing else instead, and agrees. But when she does find him, their talk goes some thing like
Mildred: "Waller wanted me to tell you that hes glad you left, and that he's never been happier, or gotten more work done since he hired you!"
Cailean: "w- what?!"
M:"You heared me! or did those burns make you hard of hearing?"
C: B- But" *speechless*
M: "hmm it seemed to have affected your speech too!"
C: W- WELL YOU CAN TELL THAT FOOLISH JERK THAT IM GLAD I LEFT TO, AND TELL HIM THANK YOU FOR RUINING MY LIFE"
M: *tauntingly* okay then"
C:"AND YOU CAN GO SCREW OFF YOU JERK"
M: *still tauntingly* "ooookaaay theeen"
and when she gets back home, she acts really sad and distraught and tells Waller what Cailean had said, but more dramiticly, even adding in a few "other" words (such as asshole and fuck) and ended it saying that he told her "to fuck off, and die, you bitch!" and then proceeded to look distraught some more. This left Waller speechless, and shocked, then angry "W- B- A- AUGH! I'm going to my room to sleep!" (this would annoy Mildred a bit since he 'didn't try to comfort her' but she decided to "let it go this time") Eventually Cailean decided to try and apologize, not only because he was starving and rather cold, but mainly because he really was sorry, and missed Waller. On the same night, Mildred decided it was the perfect night to kill Waller. what happens next is mainly up to you. also please note that you can change and add a bit, and that this is merely like, the backbone of the story, but with more detail at the end since i kinda got a bit carried away. Thus meaning you can add a lot of stuff between whats happening here, and heck, you can even make this happen in like, the time span of two weeks, to like, 3 years for all i care x> or perhaps Cailean could fall in love with a girl, resulting in a simular result, or vice versa (Handsome_monster has a similar idea) and/ or Waller could of created a serum thing or what ever that could rid of Cailean's burn scars, and is torn between the idea of ahving the ability to have a normal, social life like before but possibly leave Waller, or stay as he is and stay with Waller, but be mocked by people for his hair and/ or postures and/ or burn marks. This could also be added in the previous idea(s) which could add a bit of drama, or some thing. All though these ideas could be too "Hollywood", and i don't even know if you even read the comments x> but ya :> thats my idea(s)
Handsome_monster


I like the idea, but rather than just a madman in Victorian England, you could add a Sherlock Holmes type character. Maybe a monstrous musclebound form for Cailean would be cool, caused by a temporary serum. Finally I suggest a wealthy girl who likes Cailean despite the burn scars (they meet due to Doctor Waller's connections). All the same, this is simply a suggestion, and I slightly doubt you will use any of this. *shrugs and walks away*


@Handsome_monster More or less, all you need is more supporting characters in order to get it to work. you might try adding other scientists that Webber knows, maybe a Dracula like vampire, perhaps a small faction entirely composed of werewolves. There is a lot you could pull from really old monster books, or even from mystery novels such as Sherlock Holmes.


@Handsome_monster while i do really like your ideas, Humon said that "I never really liked the story though. It annoyed me how “Hollywood” it was" and your idea might be a bit to "Hollywood", especially if u would be adding said creature or a Sherlock Holmes figure. (i sent similar replies to a few others)
GXUNIVERSE


Not going to lie. I ship this.
LavaMadness


The plot interests me, and it has potential. The description says it all.
FrankHarr


I would love to hear more about this narrative.
cantsleeptocrazy


Awwww! Can I write a story for this? I think it would be in interesting story. can they fight one of Dr, Wallers rouge creations?
docterzero


Would love to actually read a story using these characters. Maybe you should give it a try someday.
Add comment: Please Sign in or create an accout to comment.