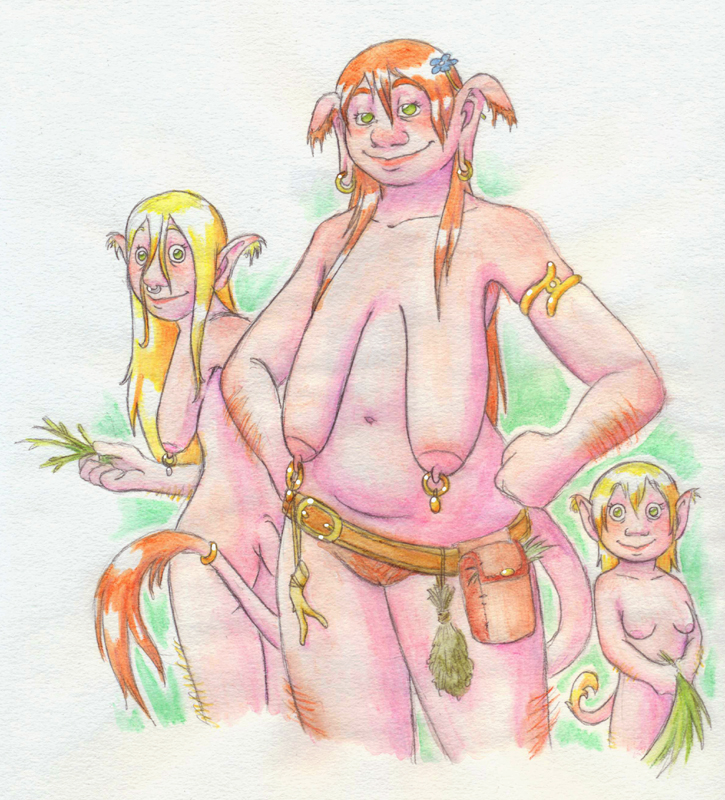 A slattenpatte is a special Danish troll you won’t find in other Nordic countries (Like you won’t find huldras in Denmark). Their name means “Saggy Breasts” and I dare say it’s pretty obvious why they're called that. They were said to be “unfortunate looking” and naked at all times.

While normal trolls were usually found in the woods, slattenpattes were mostly seen on either the moor or by the streams where they collected herbs. They were the trolls’ witches and had great magical powers. Most of the stories about them involves them running. They threw their breasts over their shoulders so they wouldn't get in the way.

Young men were told not to sleep on the moor or by streams because slattenpattes loved young men, and if they found them sleeping, they would rape them. If a young man however chose to sleep with a slattenpatte at his own free will, she would reward him by letting him drink her breast milk, which would give him magical powers.

The reason why they were so keen on sleeping with men was most likely because their own offspring was always female, so here is a slattenpatte and her two daughters collecting herbs.


In north Spain lot of mythology is related with Celtic and Scandinavian one, we have a quite similar creature called "Ojancana"
satwnhetafangirl


Lel. Sounds like the 'wewe gombel'. Only she abducts kids who has issues with their parents...
FH2ElectricBugalu


This brings a whole new meaning to the song "Do your boobs hang low?"


Aaah, so finally I've found out where some of my ancestors come from - my greatgrandmother was told to have breasts like this (including the throwing them over her shoulder to wash bit) and she was great with the Russian herb lore. But I think she was not a pure-blooded slattenpatte (the name makes me giggle-snort) - she walked around fully clothed


Pardon the ignorance, but do the trolls use piercings or is it an artist's touch? Mostly out of curiosity but was wondering if there was a real purpose.
DeletedAccount