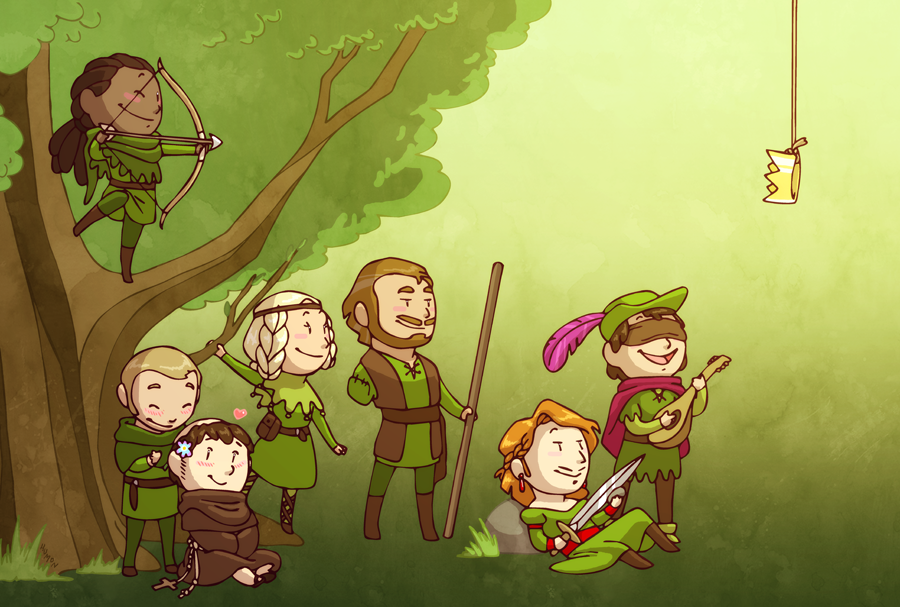 Robin and his Men

This is strongly inspired by modern Danish Robin Hood traditions. You'd be hard pressed to find a big production classic Robin Hood play here, because there's nothing new about a dark skinned Robin Hood, Maid Marian is always a feminist, and there's a fifty-fifty chance of Friar Tuck being gay (and if David of Doncaster appears he will often be romantically involved with Tuck).

Little John as an amputee, Alan-a-Dale as blind, and Will Scarlet as even more feminine than usual are my own suggestions for alternative characters interpretations.


Story time! This definately need a comic series of its own!

Mostly because you see none of those things in English/American versions of Robin Hood. I want to know more about Dark Skinned Robin, and the entire cast. It makes more sense in some ways.


This is totally bringing back memories from watching the mel brooks classic "robin hood: men in tights"
kier


you were thinking about lister, werent you.
emmynic


a friend of mine didn't really know about robin hood, and so after explaining it to her; she was adamant that the reason why little john is called that; is because he's not 'appropriately equipped' and robin said it as a joke and it just stuck- though no one knows the real reason why. i didn't know whether to laugh or face slam a table.
Thelandofnowhere


They are all so cute
AgProv

But one quibble: has this picture been laterally flipped? As in the preceding character sketch you did for Little John, it was his LEFT arm that was amputated: in this picture it's the right arm.I'm sure it's down to something simple like the picture having being somehow reversed...

The dark-skinned Robin Hood? Why not? As at least two different places in England claim him and the British can't even agree ourselves where he's from, let alone what he looked like.... English myth preserves the concept of the Green Man of the Woods, a nature spirit who is perhaps a reflection of the Celtic fertility god Cernunnos or Herne the Hunter. The Green Man is capricious, dresses all in green with green hair, and some representations give him a brown skin like the bark of some trees. Folklorists have suggested Robin and the gang are archetypes of nature spirits - this aspect survives in the "lincoln green" of the clothing and the clear suggestion is that elves and other forest spirits are being described here, not people.


@AgProv oh that's pretty cool. It's always interesting to see how stories change over time.
Add comment: Please Sign in or create an accout to comment.