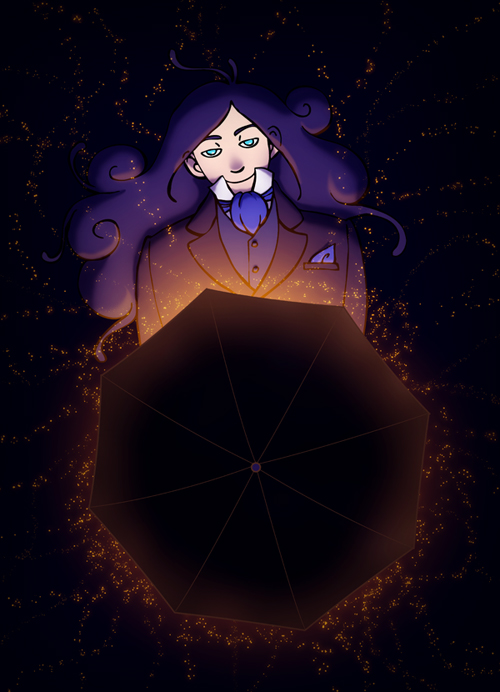 My attempt at Ole Lukøje (Which translates to "Ole Shuteye" or "Ole Eye Closer"), also known as Jon Blund in Norway and Sweden.

He is the Nordic and German version of the Sandman, a creature said to put children to sleep by sprinkling magic sand in their eyes so they have to close them. Ole is a bit different in that he carries an umbrella (sometimes two) which he folds out after putting the children to sleep, and it cause the children to dream.

He sometimes have a darker side to him as well. He is also connected with death, and occasionally he puts someone to sleep forever, meaning he is responsible for people who die in their sleep.


Think I'm going to study up on this version of the Sandman for sure. So that when I have kids, this is the version I'm gonna teach em, lol. This version sounds much better than the crappy half fairy that is in American culture.
Pippin


@ Dakaria
he is called Sandmännchen in Germany, I think. A little cute guy with beard, hat and dreamsand.
I´ve seen him sometimes on television, when I was smaller!
Dakaria


I'm german and I've never heard of him
FH2ElectricBugalu


In my opinion, I wouldn't mind having someone that cute coming to my home making me go to sleep........... i hate having insomnia
DeletedAccount


I remember when I was little, I knew a story about a sort of sandman who had an umbrella for good kids, that made them dream good dreams, and one for bad kids, which gave them nightmares. It might have been Hans Christian Andersen, I don't quite remember.


Pretty cool, the abstract effect the posistion of the umbrella has. Really does look like something one might glimpse before drifting off.
DeletedAccount


yeah, in Sweden he's called John Blund.
I've never heard of that evil side though... Cool, have to google it! ;D
DeletedAccount


Oh I remember him, even know i'm not nordic nor german he still appeared in some of my werid dreams...
Add comment: Please Sign in or create an accout to comment.