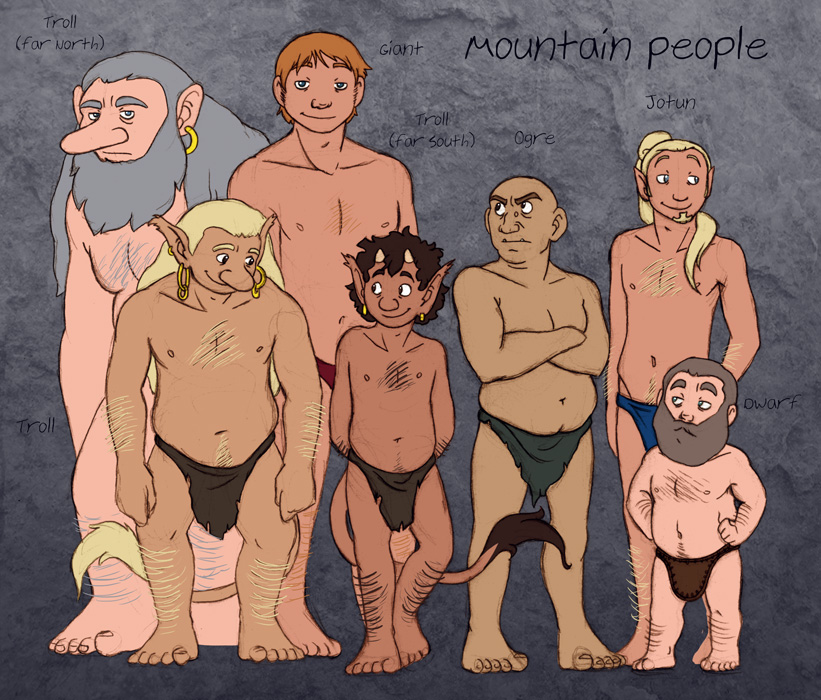 As usual there are three trolls because they get bigger and meaner the father up North you get. The biggest has the lightest skin because they turn to stone during the day, so they don't get a whole lot of sun, obviously. Trolls often have magic powers, but it usually involve turning one thing into another, including living things.

Truthfully, the Ogre doesn't really belong in the picture because they're French/English/German, but they're often compared to trolls even though they're completely different species, and the trolls are a good deal older than ogres. Ogres also tend to be a lot meaner than trolls (Shrek not counting of course).

Giants and the trolls far North are often confused with each other, but giants look like ordinary but big humans, and surprisingly trolls are often bigger than giants. They can be either mean or gentle.

Unlike what Tolkien told us in Lord of The Rings, dwarfs are not a warlike people at all in Nordic mythology. They live quietly underground where they dig for metals or steal gold from burial places. They would much rather bribe their way out trouble than fight.

Finally there's the jotuns who are by far the most powerful of the peoples. They can control the wild nature and have magic powers and knowledge not even the trolls can compete with. They're incredibly strong, and back in the day people often dreamt marrying a jotun.


It is wrong that I think the small troll dude looks cute? I like his eyes. Yes definitely the eyes and not the ... [forces myself to look higher] Very sweet eyes.... ũ.ũ
FH2ElectricBugalu


Obviously, as you go further north, the troll species get larger to conserve heat and are less active to conserve energy.

And are they polar bears?


The dwarf is looking rather smug... Why's that, Humon? =^.^=
CheshireSwift


It sounds a lot like they viewed Jotun as idealised versions of themselves, much like Tolkien did with elves.
DeletedAccount


Was it a cartoon with some trolls, where one of them played a flute and had a tiny troll called Lilleskid living in his hat??
If, so, I know which one you talk about!
DeletedAccount


Screw back in the day, I dream of marrying a jotunn now!
DeletedAccount