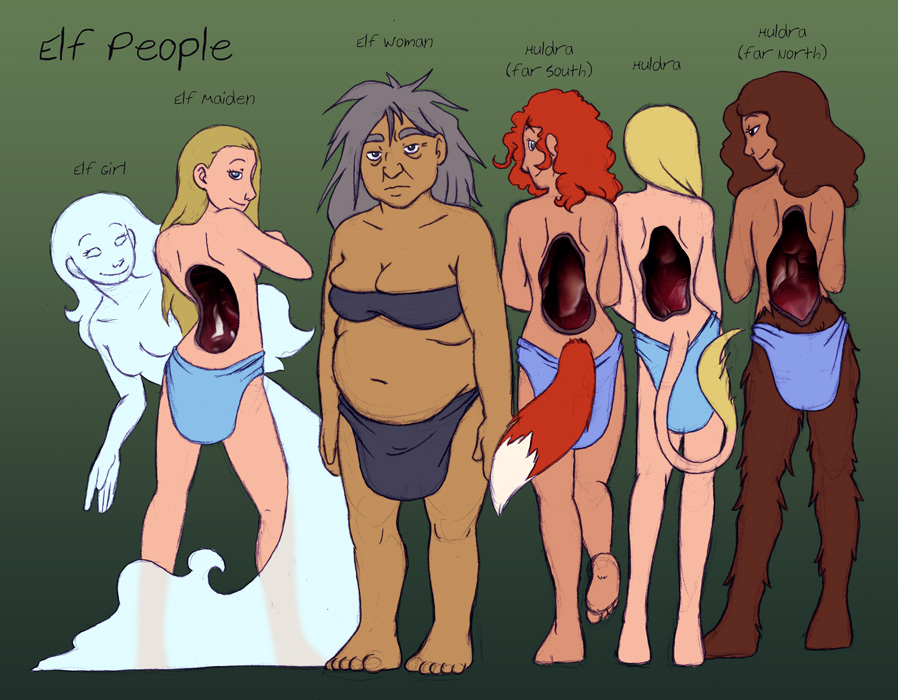 By popular demand, here's the Elf People from Nordic mythology. I only drew the actual elves because there are a TON of creatures who belong in this group, yet are not elves.

First of, forget all you've learned about elves from fantasy books. Actual elves from Nordic mythology are nothing like that. They don't have pointy ears, they do get old, and they get uglier and uglier with age.

One thing that define elves of all kinds is that they have holes in their backs, that either look like rotten meat filled with maggots, fresh bloody meat, or a rotten tree stump filled with insects.
In modern times people tend to leave out the hole in their backs because it makes them less sexy, but that's exactly the point. When you see an elf from the front you're supposed to go "Niiiice!" and then you see them from the back and go, "JESUSFUCKINGCHRISTWHATTHEHELL!!?!" so it saddens me when people take away the hole because the elves lose a lot of the intended mystery/horror. (So I'm not happy with the Norwegian movie Thale. And yes, I've seen Troll Hunter)
The elves wouldn't mind though because they don't like when humans see the hole, so if you catch a glimse of it you're as good as dead.
(I have to admit that one of the reasons why I like to keep the holes is also because I dislike perfect looking creatures. The tails alone just make them look cute.
It's the same reason why I never cared for fantasy elves or modern vampires.)

The misty elf girls can be seen dancing in the early morning. They often invite people to join, and will then dance the person to death.

The special branch of elves called huldras also have a tail (either fox or cow) or are hairy from that waist and down. It is said that the ones with cow tails can become human if you cut the tail off, and there are stories about them only wanting to marry a human so they can become human themselves.

Elves love nothing more than to kidnap people and hold them as, well let's be hones here, sex slaves. Why they do it is everybody's guess because there's both female and male elves, though there seem to be an overpopulation of females, so that might be a reason. Anyone who get captured by an elf will go insane and might be found years later wandering around, not remembering what happened to them.

Though most stories have elves as evil, they can also be nice, because all Nordic creatures will either be good or evil depending on how you treat them. But only a fool will trust elves too much...


This makes me think of the movie "Äppelkriget", where they have both the kind who are mist-like and the kind with hollow tree-trunk back.
Lirkon


When I was small, my father told me that elf women danced in the morning mist. They were beautiful women with hollow backs, they almost seemed to be made of the mist they danced in. If you danced with them, you would be trapped in the mist with them forever.
Docterzerothenaga


I actually like this kind of elves, but I also like Tolkiens Elves, so I my little own fantasy world, I have both Elves (Tolkien style) and Huldrafolk (these ones)

The huldra folk just don't get old and ugly, I can live without that part...
Toyloli


I stumbled across this by accident. I find the hole thing interesting, in Irish mythology we don't have that although almost everything else you say is the same. We do have that Elves bodies are designed to look like nature. You see a wood elf in the woods from the back and you would mistake them for a tree. Until they turn around and then they look humanoid.
LemonDancer


Actually, the Icelandic elves - it's pretty wonderful to read about them, and not just because they played a big part in the inspiration of Tolkien's elves - do not have the hollow backs of their Scandinavian counterparts. When it comes to creatures with a penchant for tricking humans, they do however need to have some defining characteristic in order for the humans to be able to escape them. For some strange reason, some sources concerning Icelandic elves claim that they don't have a nasal septum, though not many people know this now (maybe because, like the hollow backs, it just doesn't sound all that attractive). They do lure people into their hills/cliffs like the scandinavian elves, and they leave changelings as well, but for the most part they live peacefully alongside humans, despite the occasional strife on account of humans accidentally herding the elves' sheep by mistake. Also interesting - in the Norse mythology, the elves live with the gods, and many scholars within the field have theorised that the elves are in fact the Vanir. The Vanir were a race of gods preceding the Aesir, more primitive and connected with nature. After much fighting, the Aesir took over, and the Vanir became minor deities (very similar to the Titans and Olympians), and the theory goes that they devolved into the elves we know today. Also, just a final point, the majority of Icelanders still believe in elves. No joke.
FH2ElectricBugalu


"Elves love nothing more than to kidnap people and hold them as, well let's be hones here, sex slaves. Why they do it is everybody's guess because there's both female and male elves, though there seem to be an overpopulation of females, so that might be a reason."

Perhaps they're steril with each other and require a human for children.

Darned if I can explain the hole, though. Part of the process of going from mist to flesh, perhaps?


Always thought the deal with the beautiful aristocratic vampire was luring technique (though that has changed into poor versions of Boris Karloff's version of The Mummy since then) luring men or women to them with beauty, hypnotizing them when they're close enough and then suddenly showing their true faces like a Venus Flytrap! Mwahahaha! There's a reason some versions of the poster for the Bela Lugosi Dracula movie had a big old spiders web.
Shadetail


there was a myth that the elves (the ones with cow tails this on was about) would come into the towns and city's pretending to be women, so the only way to tell they were elves (because of course back then leaving a that much skin bare was scandalous) was if the tail poked out, of course if this happened they'd kill the witnesses

however a man was dancing with an elf when he spied her tail and courteously told her that her stocking had slipped, she went to the powder room and fixed the problem with no witnesses and for the man's help she gave him good fortune or something
Pondskipper


That's why i generally prefer drawing males. You can make them as imperfect as you like, scars, ugly faces, war-wounds etc. But do any of that to a woman and 'no shes ugly, it doesn't look like a woman, women are supposed to be...[insert superficial qualities]'
idolsidle