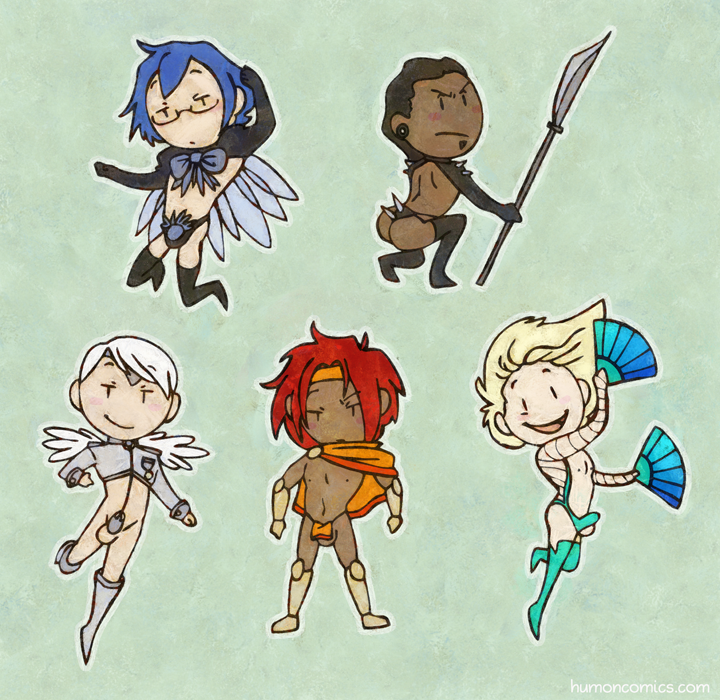 Some very stupid fighting gear for men, heavily inspired by female designs I've seen. Only, instead of showing as much boob as possible, they show as much ball as possible.

I may or may not use these guys in the future for a joke comic. Any suggestions for the story?


lol one of them remind me of Sweden. I will never look at him the same again.
SoloETriste


I'm really getting some Kill La Kill vibes from this...
emmynic


bottom left and right ones remind me of niles and his 'brother' and i can totally imagine duncan being forced to wear the black and spiky number, by natalie. you've even got the angry pout he'd have on his face.
WestofAragon


The spikey butt one is hilarious.
Cressela


The one on the bottom right, the blue 'suited' blonde, was his design inspired by MKs Kitana? Becuase thats what I immediantly thought of when I saw him. I should really play MK again some time....
Funnyface

Ace/second in command, the fighter with the white hair, whom the rest call, Name: blonko

The brains in the group though still cool, fighter with navy blue hair, they call him by his name. Name: lapis

The raph, fighter with the spear, they call him, name: raven

The fun one, fighter in the turquoise suit and boots, they call him, name: sapphire


It was a cold and stormy night. The Magical Fighters aka MF were relaxing on the warm sofa they weren't afraid of some thunder. Until,
"meow meow!" They heard a cry for help in the midst of the storm. "Sir!, it sounds like a cat stuck in a tree we have to get him down!" Sapphire exclaimed with lots of passion jumping up of the sofa giving the others quite the view. "It's just a cat you don't have to get so exited." Yawned raven. "Actually", lapis corrected, "if the cat is stuck in the tree there is an 80-50 % chance that the cat would get struck, which would cause the lightning to strike our house." "Then we must get that cat down!" Crimson said. They quickly ran to the tree. It was right next to there house. The cat looked down so happy he was to be saved. Then they heard footsteps a teen girl with an umbrella was walking toward them.
"Oh!" She said looking up, "were you going to… save my cat…?" She added shyly. "Yes… we were…" blonko answered.-

I left a little cliff hanger for now but it's kinda character development.
I hope you find this helpful. I'll probably add on though.
hellokiofasgard


Omg, this is perfect. Lately I have been thinking about insane anime boobs, and I NEEDED a male equivalent. So like, dudes with giant, juicy, bouncing cocks & balls that have minds of their own and move to dodge bullets? Yesyesyesyesyes. If dudes were treated like ladies in stuff like this, every picture would be a crotch shot, aimed at some juicy looking package, the guy looking down at you with these vulnerable shota eyes. Lol.

As for a story? You could make it like... Some really stereotypical bs(that happens with female characters) LOL.

Like, they're all SUPER attractive, the guy with glasses doesn't think he's cute but the butch red-headed guy is creepin' on him cause the nerd is his type and the nerd also has the BIGGEST, JUICIEST package, the angel is a total virgin, the spiky guy is promiscuous and kinky as hell, the guy with the fans will literally bang/submit to anyone. They all have HUGE mommy issues and fall prey to any woman who wants to bang them, except for the butch guy, who is gay and has daddy issues(while the rest are presumably bi/straight but with gay tendencies for fanservice's sake). The angel has mommy and daddy issues and is very effeminate. Oh, and fanservice happens all the time.

Oooh, ooh, and... *snrk* the angel guy has powers of seduction to fight his enemies so he's always ending up in super sexual situations and reacting like a shy precious little flower.

Plot? Plotttt.... the main character, probably angel guy, has an evil, powerful, super-strong butch mother who is also a queen, or something, so they have to go on a quest and defeat the evil she's put into the land and travel around searching for key items and shit to get to/defeat her.

The mother also has a favorite consort who also happens to be angel-guy's father, and he's SUPER attractive and hyper sexual and touchy, just to make things super awkward. The queen just has a fuckin' harem of dudes. (Bonus points if you base her off of a super macho version of yourself, LOL)

This is just a suggestion based on all the stupid plots I've seen involving a cast of girl characters that was "SUPPOSEDLY" not supposed to be sexist, despite 99% of the show/game/manga/etc being fanservice. So that's why it's so mean and stupid and ridiculous to the characters, lol.

So these guys try to act strong, constantly break down in tears and cuddle/touch all over each other for comfort, even the guy who tries to act tough, have petty "cat fights"(ROLLS EYES AT THAT TERM), angry make-up make-outs(in which the packages touch a lot, LOL), etc etc etc. One of them can summon monsters to fight for them, the females usually being super powerful and having normal armor that makes sense, with the male monsters sexual as hell.
PajamaLlama


The one on the bottom right seems the most accurate: Strings and boots
angelofdeath64


@Netherlands what's a few millimetres of cloth going to do against a blunt force?
FH2ElectricBugalu


They've been hired bay an evil overlord. They're complaining about her during lunch and guard training.