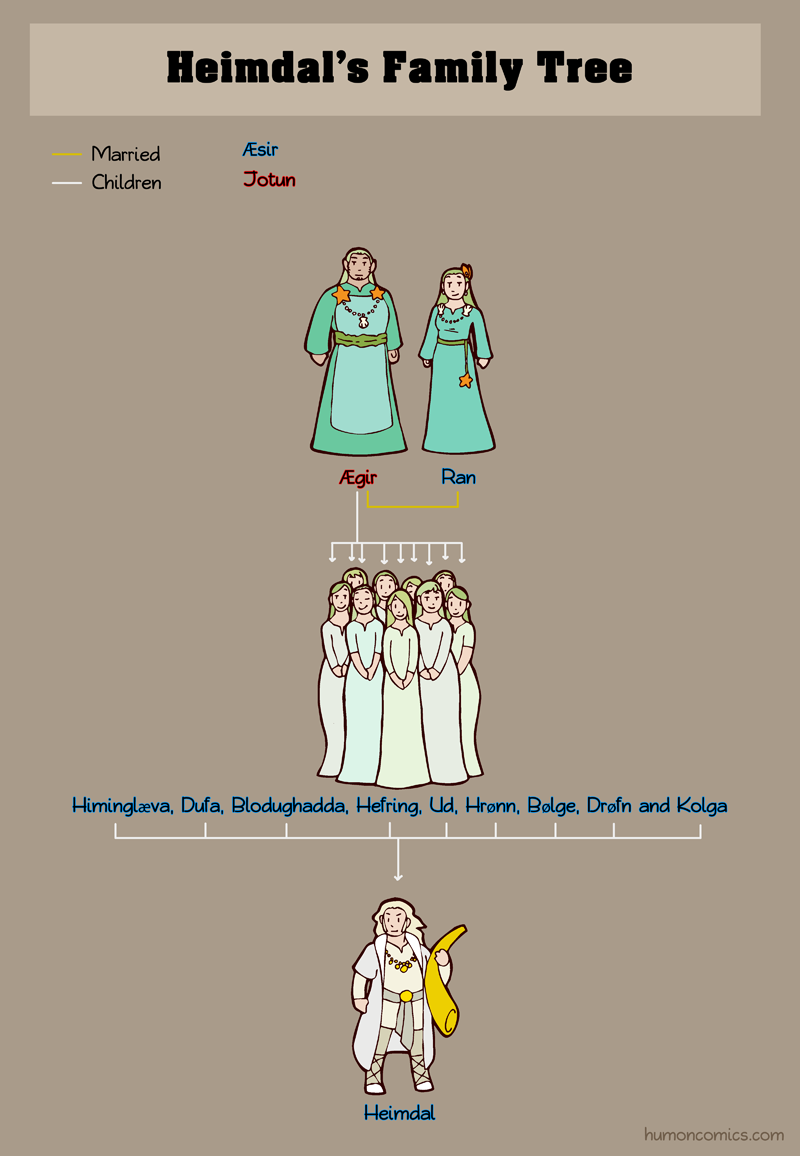 Heimdal's family tree is a bit wishywashy. We know he had nine virgin mothers, so people speculate that they're Ægir's nine daughters, but we don't know for sure.

Also, Ran is sometimes said to be one of the Æsir, sometimes a Jotun, and nowhere dos it say she's the mother of the nine daughters, only that she's married to Ægir, so it might be another case of a male Jotun randomly giving birth.


I used to read a book about Norse myths written by a Chinese. It said Heimdal has 9 mums and 1 dad, who is our mighty all-father...so curious...and when I shared this scary story with my friend, she commented, 'I suppose it was ODIN who preganent...' XD
zentatsu


So didn't most of the Aesir start out as Jotan?


@zentatsu It's funny that you say that because, thinking about it, It's kinda like the relationship between Titans and gods in Greek mythology. So I'm guessing that even tho it's a similar group, the Jotun's (which represent nature or natural phenomena like aging and stuff) preceded the gods which preceded the humans... Huh, now that I think about it, both mythologies are pretty freaking similar.
bermudatri


Does this mean he was born in 1 month?
dougzero


I've read a couple of excellent books on the Norse myths in English, Gods and Myths of the Viking Age by H. R. Ellis Davidson and The Norse Myths by Kevin Crossley-Holland. In Davidson's book, she discusses the root of the Heimdall myths as a parallel to Celtic myths about Manannan. There is a theory that Heimdall is a chief god of an earlier myth cycle (or maybe a Vanir), connected with the sea. The Nine mothers are the nine waves of the ocean, pictured as "ewes", and the Heimdall is "the ram", the ninth wave. Heimdall's horn is part of that image, apparently, and he is pictured as either the father of the nine waves or as the child of the nine waves, or both. The text connects the nine waves to Longfellow's "ninth wave" in the Coming of Arthur.
WestofAragon


Sooooooo, I know this should probably not be a question given that in the myths men gave birth in male form, but how do nine people give birth to one person? Like do they each have one piece of the fetus grow inside them then they all simultaneously give birth and the baby magically forms into one thing? That's the only way I could think to make it work.
AgProv


Blodughadda. I understand the names are in old norse and must follow Nordic pronunciation convention, but looking at the name set out like that it evokes the Welsh folklore character of Blodeuwedd (A woman called into being from the flowers of the field and forest). could this be a case of a cross-fertilisation between two neighbouring mythologies - a character from Welsh myth who found a foothold in another, or else a minor Nordic character crossing into Wales?
MrSaukko


@altalemur Or maybe after the magic night thing they all gave birth to a one body part and the put the pieces together thus making Heimdall?
altalemur


i always wondered if Heimdal's mothers were in a 9-poly lesbian marriage and one of them carried him, or if it was a magic god thing and all of them had one really wild night, they woke up and there was Heimdal.
Add comment: Please Sign in or create an accout to comment.