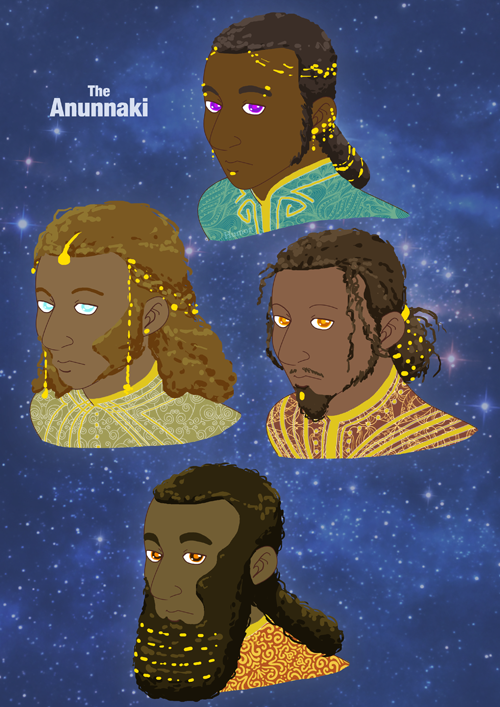 As promised, the Anunnaki aliens.

They are said to be one of the oldest and most advanced races in the universe, and responsible for creating other races that look like them, like humans, tall whites and nordics. They created these races to be their slaves, so even though they've left us, they expect complete submission from us should they ever return. It's also not unusual to see nordic aliens in the company of Anunnaki as personal slaves, but the nordics accept this as their destiny as a thanks to the Anunnaki for creating them. Tall whites on the other hand are attempting to break out of this arrangement and are trying to scheme with humans to end it, just waiting for us to become more powerful allies.

I decorated them with lots of gold because they are apparently obsessed with it, and it's a big motivator for them to visit other planets. (Mind you, the Anunnaki is not a cruel race and doesn't leave the planets they visit or the races they create devastated. The new races are given knowledge and means to survive on their own and allowed to evolve and expand to other planets)

For my version of the Nordics, go here http://humoncomics.com/nordic-alien-designs


You should make one of these with the Tall blacks you introduced recently. I love these alien introduction series
WestofAragon


very nice drawings. I'm not sure how I feel about the anunnaki in general though
Tkun


So we were created to serve Mr. T? Doesn't sounds that bad.
BetweenTwoOceans


Not trying to be rude, just curious: Who comes up with this stuff?
Hel