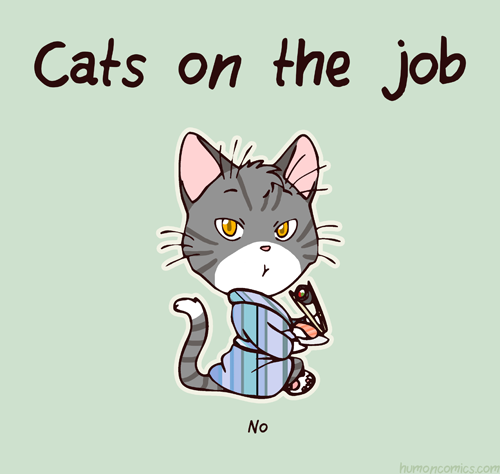 Cat on the job

Cats have jobs like pest control or therapy, but unlike dogs they're not trained for it. You basically just take a cat, put it somewhere and hope it does what you want it to.

So cats are never really working, just doing what they want.


Cats are difficult to train because they don't respond to punishment with "I'd better not do that again," but with "f*ck this I'm out of here". They DO respond to pure positive reinforcement, aka "clicker training". (see "Animals Make Us Human" by Temple Grandin)
ddwiseman


Cats are evil man! They just do what they want, that's ether being lazy or deadly.

Cats do work every day as being cats. They do not work as humans, dogs or horses, it is more complicated than that. They are sort of living sensors that go around us every day, watching, looking, listening and sniffing around to see, that everything is as it should be. If everything is well, the cat simply do nothing and is happy and content. So, in sense, that cat is working wery well in that picture.

A week ago my friends house was burgled. She was away for the weekend and her husband and cats were "alone" at home. Since her husband had been visiting friends and car was gone, thieves thought that the house was empty. They probably had been surveying the neighbourhood for weeks to see where would be a good place to strike.

My friends husband had just returned to home and were about to go to bed, when he heard that someone came in. Thieves, three men with knives, came in from the front door and there was a nasty suprise for all, since the house wasn´t empty. Thieves used their own keys, god knows how they got them...

Situation might have turned out quite nasty, but then the cat worked. There were kittens in the house and as kittens, they were running aroud and about. Then one of the men stepped on tail of one of the kittens and the mothercat, without any doubts or warning, leaped on that mans face and started to claw and scratch it. It was defending her home, kittens and apparently, also people.

Thief that was attaked by cat, started to scream and yell and god it must have hurted. (I hope that he is allergic to cats and he suffers twice as much.) This all caused a lot of general confusion and thieves decided not to take any risks with the human part of the household and they left in the hurry. My friends husband is not entirely helpless, what comes to self defence, but facing three armed men is not a situation that has any favours for you...

Next day they had new locks for the doors and mothercat was growling for workmen too, apparently to ensure that they were interested only about doors and locks. She was standing by my friends husband and was very protective about him too.

Take for example, our cat Gemini, who loves nothing more than giving affection as an office cat or therapy cat. She has enough social skills to do the jobs mentioned.

It's a matter of my father getting a job suitable for Gemini and him as she listens to him the most and best.
crwydryny

while with dogs I've had it seams that they only have one mood "hey hey yeah yeah what can I do huh huh... oooh stick yeah yeah I can chase it yeah...."