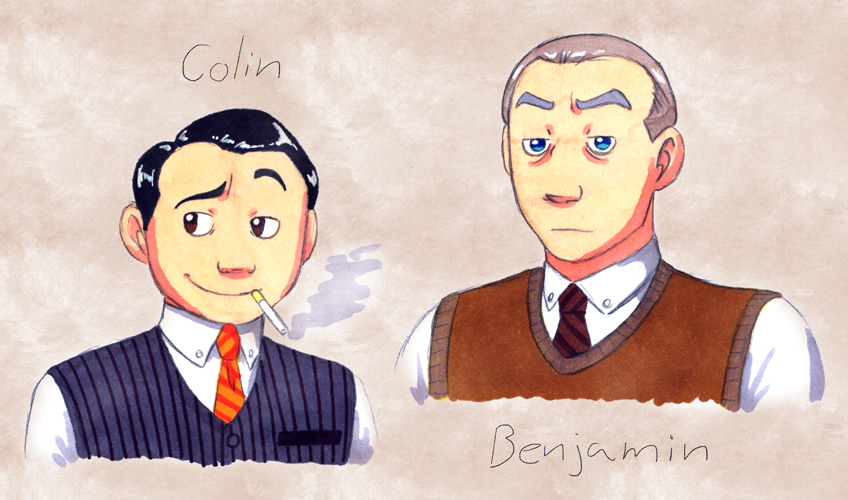 More late night sketching.
I felt these guys needed a colour picture, most of all because people seem to think the American has blue eyes and the German is blond. He's supposed to have light graying hair. Generals are rarely young after all, especially during the first world war.

And they have names now. Well, they've been having names for a long time, but now you know them.

EDIT: I have no idea why Benjamin's eyebrows ended up looking like that. They are supposed to be the same shade of grey as his hair, only less warm, and did on my other computer. Now they just look weird. I'll have to do something about that later.


Just a note on historical accuracy: Benjamin would be a very unusual name for a German at this time. It sounds very odd, like a white anglo-saxon American of 1900 being called Pablo or Vladimir. Before WWII, basically only Jews had it as their first name (more precisely, it has only become fashionable for Gentiles since the 1980s; I'm called Benjamin myself). And it would be almost impossible to imagine a German general of Jewish descent at this time.
MimiSlushie


I hope you will keep continuing this comic

The story is interesting
PurplePlum


i never noticed this one before; being that they caught my fancy i have to admit i was a little excited to see them in color!! (your right, i thought the Benjamin was blonde, too)
DeletedAccount


I really wonder where this story is leading. It's really intriguing.
DeletedAccount

I hope you will do more of it again
AmericanButterfly


this guys are so great