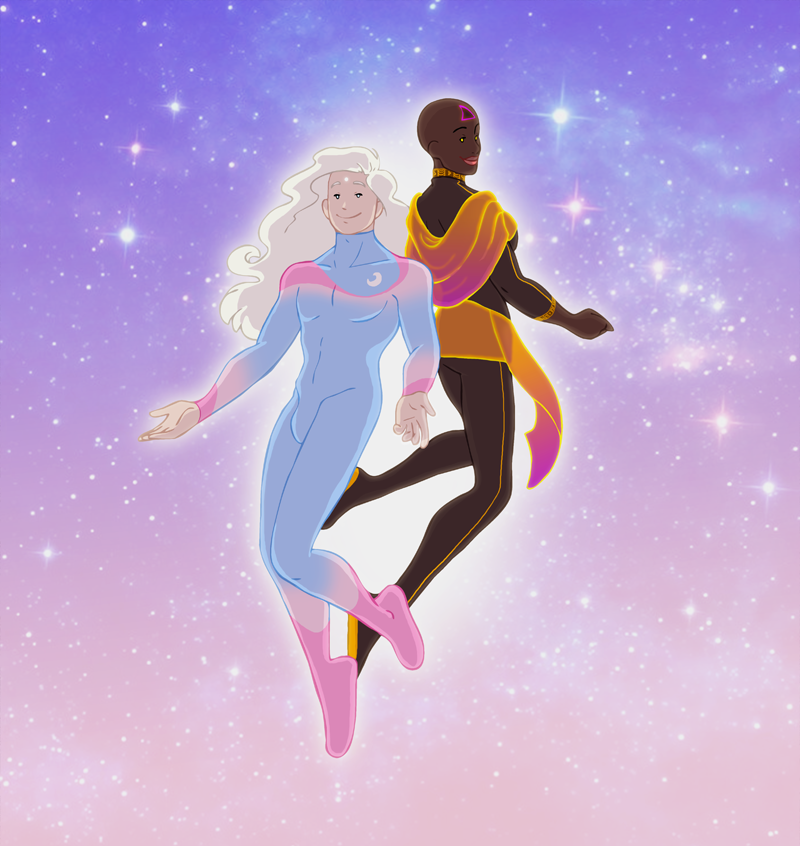 A Nordic Alien and a Tall Black Alien.

Most people know the small grey aliens as the default aliens these days. If you're a bit more nerdy you know about the reptilians, and if you're extra nerdy you know the nordics.

Nordics are some of the oldest aliens in alien lore. They were originally called Space Brothers, then Nordics, and today they're often called Pleiadians. Their skin is pale white to light tan, their hair blonde to white (sometimes even gold), and they wear skintight bodysuits that are either blue, white or rose.
It's usually male Nordics who first contact humans and start teaching us about the universe, but when things get more complicated the female Nordics take over for some reason.
In the 90's Nordics often had sex with humans, but these days people who claims to have had contact with them say the Nordics stopped because humans easily get jealous. The men are supposedly very well hung.
Nordics always have long hair, except warriors who cut it "short" to just over the shoulders.

Tall Blacks are very new in alien lore, so I'm pretty excited to see in which direction they'll evolve. They have very dark skin, often completely black, and their eyes range from yellow to red. They dress in either black, yellow or purple. They're slightly taller than Nordics and look almost completely human, except when they move in certain ways people notice they have an extra joint in their arms and legs.
Their lore isn't quite solidified yet, but one thing that is certain at this point is that the women rule in their society.
Like the Nordics they are very wise and calming, but they also like to crack jokes and help people relax by making them laugh.
They are very focused on movement and often teach people a sort of slow, flowing dance that calms the mind.


Maybe call them something like, Sun people... Or even better... what about " ilanga people ", which means sun people in the Xhosa language.
Jake_Rondeau


I think I like the Tall Blacks a lot more, they look like they come from some sort of warm planet, full of gold and a pretty Wakanda-like society. I also think we should rename them. lol


Where are the tall blacks being reported?
Lora


does any on e else realize that the light dude's suit thing looks kinda like pearl's space suit from Steven Universe?


"They are very focused on movement and often teach people a sort of slow, flowing dance that calms the mind."