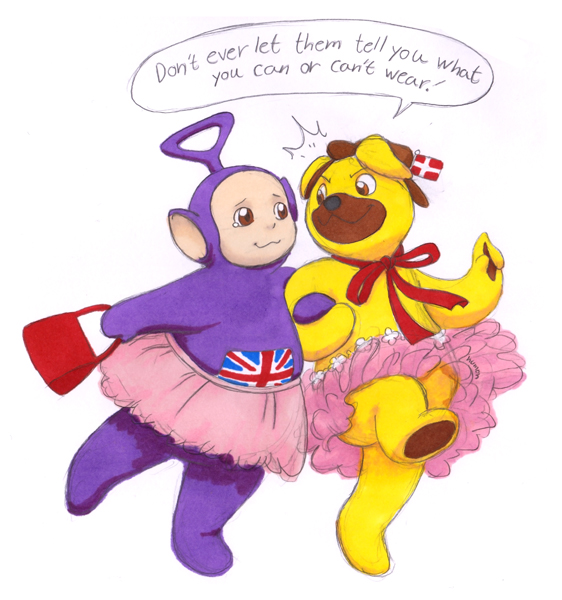 Teletubbies became too popular for it's own good, and while there were many complaints, the one most people remember was the question of Tinky Winky.

Was he meant to be gay? He carried a red purse around with him, and even wore a pink tutu!

The last one seemed especially silly to Danes because our single most iconic children's character is Bamse (Teddy) from "Bamse og Kylling" who is very male and often wear a tutu when he wants to be pretty. He even fought his gender-less friend Kylling (Chicken) for it a few times.

He never really got popular outside of Denmark, so he is still around, tutu and all.


Bamse øg kylling seems so child friendly!
While the Swedish Bamse takes “Dunderhonung” (kind of like a drug or something) to make him stronger, throws bandits who steals candy up in trees while telling people to be a good person.
Zeust


I didn't even notice Tinky Winky's purse until it was mentioned in Schmoyoho's Charlie Sheen autotune thingy, loooong after I stopped watching Teletubbies. Didn't know about the tutu until today.
ProAmericanBrit


Isn't he rip off of that Swedish bear?
Funnyface


I watched teletubies all the time when i was little
sunflower98


This is funny, I wish some mascots wear like that
theotherghostgirl


Teletubbies was and still is (I think?) a part of Finnish kids Sturday morning and I remember growing up watching it!

I've never got why it was a big deal for Tinky Winky to have a red purse and a pink tutu. It felt completely normal to me as a child, and it still does.
VoidHamlet


And another Bulgarian jumping in on the Bamse bandwagon. Has to be that same one. No, really, HAS to be.


Rock on, Bamse and Tinkywinky


Oh wait, Bamse og Kylling is someone different. I was referring to the small bear with the blue outfit.
Add comment: Please Sign in or create an accout to comment.