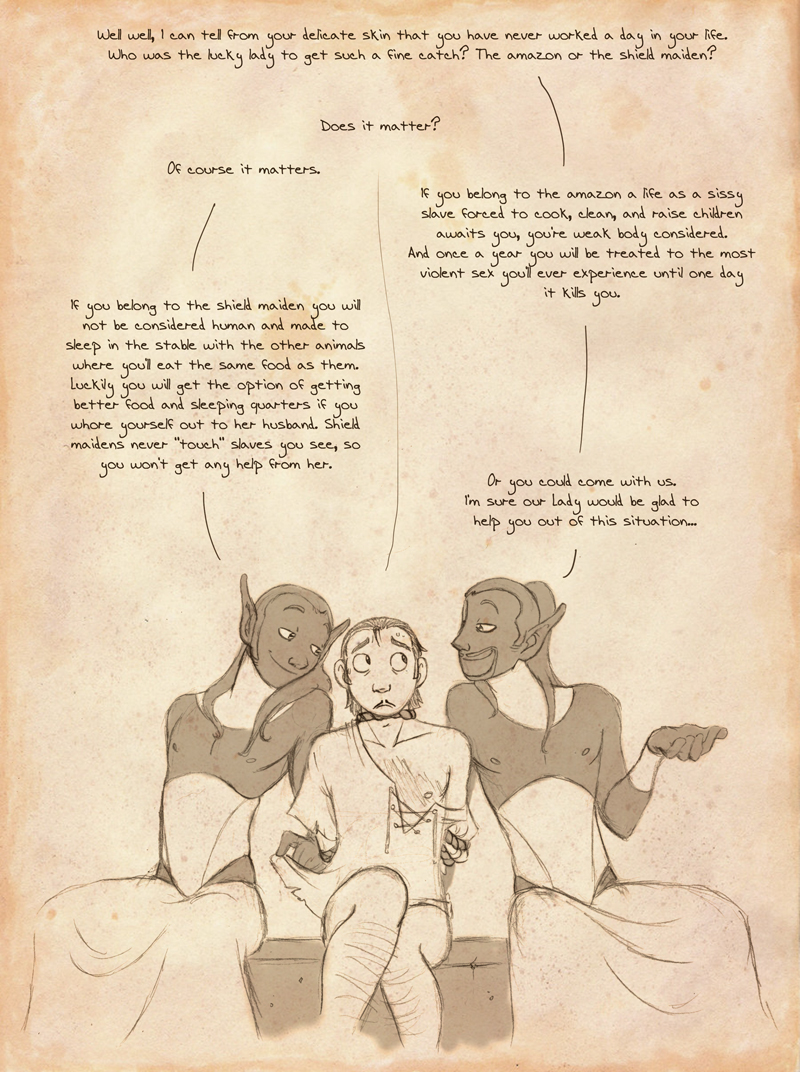 Outside the Lady's Tavern

Why is he sitting there alone? The idea is that it's outside a tavern for women only because it's run by dark elves, and the two guys are supposed to be guards who make sure no male servants or slaves runs off while they wait outside. And of course they kill time by messing with people.

They are of course making life as a slave for amazons and shield maidens sound even worse than they are because they want to scare him, but they're not that far off.

Also, while my dark elves are partly inspired by drows, I'm also very inspired by the dark elves from Nordic mythology (Yes, dark elves are not just a made up race. Like a lot of other creatures they come from the old Norse religion) So in this fantasy universe they're called svartálfar, which is old Norse for Dark Elves.

So I'll make this bit an interactive story and leave it up to you. Does he go with the dark elves and meet their Lady?


lets see greeks gave some wierd language to scandinavia wich got altered by latin and by the natural way of the north got mixed in a blender then we got nordic which then again got mixed "but after the vikings died down" and made the different nordic accents that the 3 main scandinavians use norway, sweden and danmark.

im norwegian by the way. and we as a whole country tend to have short term memory unlike sweden. but gosh we have luck and lots of it.
FH2ElectricBugalu


I sort of imagine the dark elves having high pitched feminine voices. I don't know why..
DeletedAccount


Here on Iceland we still use the word Svartálfur to mean "Dark Elf". We still speak Old Norse almost as it was a thousand years ago. Go Iceland ;D
Add comment: Please Sign in or create an accout to comment.