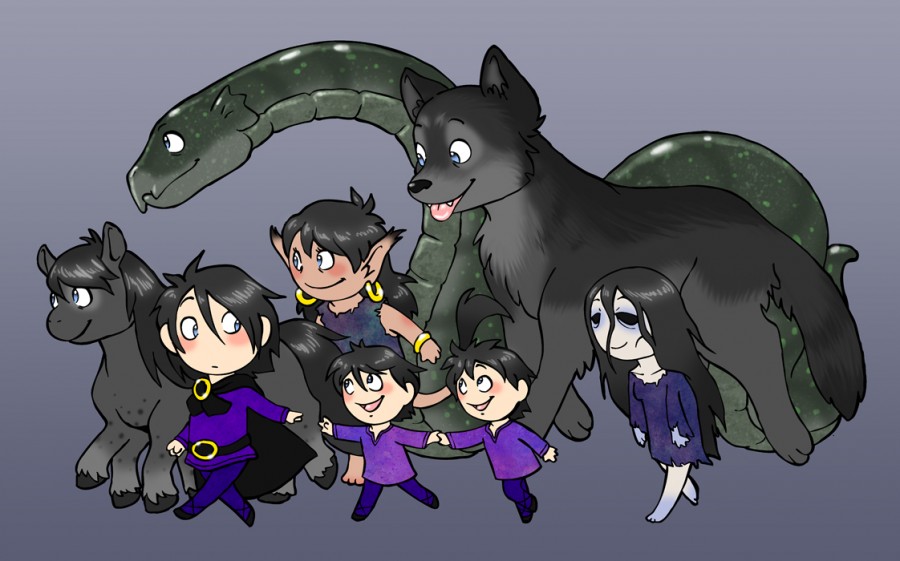 Loki and His Children

DON'T take this seriously. I took a lot of liberties with this, I know, but this is how I wanted to draw it. Draw your own version if you feel a need to make a more correct one.

The big snake in the back in the Midgard Serpent, the wolf is the Fenris Wolf, the half-dead looking woman is Hel (guidian of the underworld), all of whom he had with a jotun woman (or Ice Giantess. God I hate the English word for jotuns)

The two normal looking boys are Narfe and Vale whom he got with his wife Sigyn. They're not too normal though, as one will be turned into a wolf later and accidentally kill his brother.

I thought about adding a random human too, because apparently he had sex with a ton of men in the form of a human female and gave birth to quite a few children on earth, but I couldn't be bothered.


holy crap this is cute!
kier


the destructive end of all existence has never looked so fucking ADORABLE!!!
TheCatalyst


Has anyone ever thought to ASK LOKI if any of these far too tall tale are true? I've heard that Snorri made up most of this stuff, and he was influenced by the Big Three - specifically Christianity, and we all know how they loved to destroy the native cultures religious icons, especially the interesting ones. If I could prove my medium abilities, I'd be glad to repeat what I have asked about, but no one in my community believes in mediums.
NorseWolf


I like to imagine Loki sneaking back into Asgard having just gone and had sex with a man in female form, and getting caught by Thor/Odin/other Norse god and having to explain where he's been.
Ienkoron


I always liked the real stories of Loki, much more interesting than Marvel's


I always thought of loki as being sort of like a female hyena....
FH2ElectricBugalu


I think it's interesting how he's unsure.


Glob I love your work .
LilaBlack2


after reading the everworld series and then loking at this picture, i'm kindda wondering why didn't April and the others just...i don't know cuddle that cute doggy instead of running away or trying to kill him...
Agent00Swe


@Krilla97 It's different, but most of the time she's told to be a woman whos left side is rotten and black, and her hair would probably be lighter than that, yes, but it varies.
Add comment: Please Sign in or create an accout to comment.