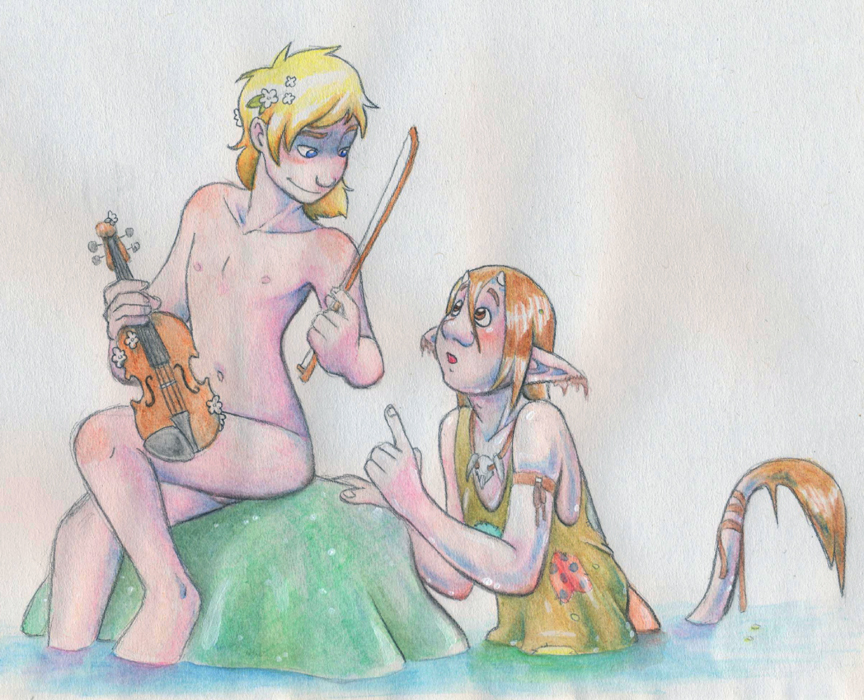 I really enjoy drawing trolls interacting with other Nordic mythological creatures. This time it’s the Nix, and for once I don't know what is going on in the picture.

He’s best known in Sweden, but there are also stories about him in most of the other Nordic countries, and quite frankly he’s an asshole.

He has two forms: a monster, and best known of all, a beautiful naked young man sitting in a stream, playing a violin.
He is said to be the best of the best at the violin, even better than the Devil himself. He used it to lure people to him, and when they got close enough he would grab them and drown them in the stream.

Sometimes he would teach a person how to play the violin as well as him, but when the person went back and played for his friends and family, the whole village would go crazy because he couldn’t stop playing, and as long as he played they couldn’t stop dancing. It didn’t stop before everybody had lost their mind or died from exhaustion.

The closest we come to that in Demark is the River Man, who is invisible. If nobody had drowned in his river for a long time, he would yell, “Now it’s time!” and some poor soul would come running and drown himself, even if someone tried to hold him back.
The River Man must have been the Nix’s ugly cousin or something.


You can see the folds of her paper


I'm not exacly an expert when it comes to norse mythical creatures but i'm fairly sure that the ''pretty young man'' version of the nix only became popular around 1882-1884. Before that he was usually depicted as a older man with a more ''inhuman'' look. Like perhaps sharp teeth, frog eyes or greenish skin.
It's only more recently that the nix is portrayed as a more beautiful looking man.
Ienkoron


Svelte and blonde would lure me in any time.....
gogolion


I wonder what the Nix would look like in his monster form.
Palvouha


This kind of reminds me of the Nøkken we have in Norway, except that Nøkken were hidious creatures with grass and seaweed all over themselves. The story is that if you walk down to a lake Nøkken will appear, grab you and drown you. Of course this story was made to scare children from going to the lake and actually drown.
WittyName


The part about being reallyreally good with the violin reminds me of "The Devil Went Down To Georgia", an American song about a youn man who beat the Devil himself at fiddle contest.
SwedishWaffle


I don't know about the monster part but "Näcken" would also appear as a horse called "Bäckahästen". He would trick childern to ride at his back and there was always room for more children even though there was children on his back. And when he took them to the river and they realised that it was him they all where taken down under water and died.
dracuella


@alvathorell yes this is Näcken or Nøkken as he's called in Danish. While some water spirits would in fact lure and kill innocents Nøkken played so beautifully that all who heard his music would stop in their tracks to listen. Birds would pause midflight and come perch on branches; even water, it is said, would slow it's stream around him to hear his wonderful violin.
That's what I read in my books growing up


Hi! Is he really called "the Nix" in some language? In Swedish he would be called "Näcken" ("the Näck", approximately "the Nude (one)")...