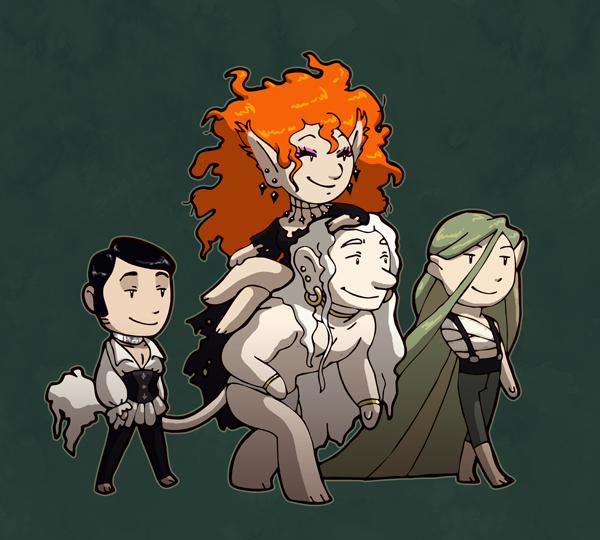 I still think about Lady Katrine and her "favorite husband" Lord Mogens from my comic Elftaken a lot. Their universe is very different from my usual folklore stuff because it's inspired by the 1800's romantic ideas about the underworld. I have several short stories about their adventures, I just have to pull myself together.

One of the recurring characters is Birk (birch) The White Troll who's official title is Lady Katrine's Steed, a title he's very proud of and which earns him a lot of respect in the underworld. Katrine has more efficient ways of traveling, but it just looks so much cooler arriving on a big, white troll.

Another is Mr. Bui. He's a vætte, which means an underworldly creature that doesn't quite fit into any category and has no trouble entering human houses. He can appear anywhere there's fresh water, like lakes, streams, wells, and even just a glass of water. He was originally Lady Katrine's go to guy when she needed to get something from the human world, but now Mogens is much better suited for it, human as he is. Mr. Bui often accompanies him though.


I wouldn't mind a few comics on Lady Katrine.
Oshi


I just noticed the “collar” around Mogens neck. I must say it is very beautiful
Evenstar


If I might be so bold, I'd like to know why Mr. Bui has been limited to his sinister hand. It would many daily tasks quite difficult.

Of course, if he needed aid in any manner, I'd be happy to provide it.
FloriFlorensen


Lady Katrine seems to be a very interesting character - love the dress!


Huh, she's a lot more Gothic than I'd imagined.
NeverAngel