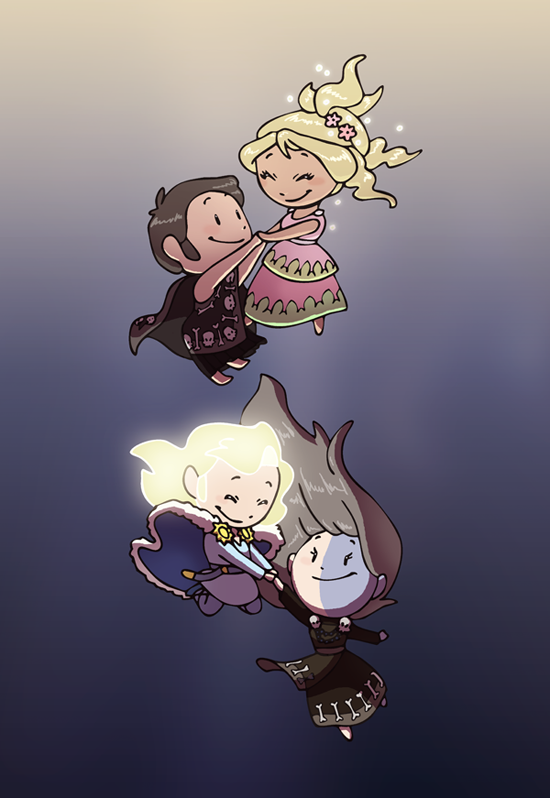 At the top are Hades and Persephone, and below them are Baldr and Hel.

Baldr and Hel aren't lovers in the old myth, but it's a modern interpretation (got popular with the comic Valhalla) that I think is pretty cute, the idea being that Hel wouldn't let Baldr leave the underworld because she had fallen in love with him, and Baldr didn't want to leave anyway because the feeling was mutual.

That version gives it some similarities with Hades and Persephone's relationship, so I had to draw them too.


AWWWWW!! Okay this is frigging cute.


Aw, Hades and Persephone is probably my favorite myth.


Idk why but i always thought persephone was a redhead


For all ye poor souls who haven't read Valhalla:
This particular story is a retelling of Balder's death. Loke is summoned by his daughter Hel, and it's set up that her realm reflects her state of mind. Later, Balder tells Loke that he wants a girl who's laughter turns the world green around him, and lets the dead dance on their graves.
Later, the Æsir are having fun throwing their weapons at Balder, and Loke convinces Balder's brother, the blind Hod, to throw a mistletoe at him.
Now, in this story, Loke didn't actually know about Balder's one weakness. He had told Hod that it was the only thing that could harm him, and plays to Hod's insecurities, planning to embarrass him. Of course, it works far better than expected, and Balder dies. Hel won't relinquish the as unless all who lives weep for him. Everything weeps, except for Loke (not out of ill will, he just can't). Meanwhile, Hel tells Balder about how she wishes she could be with the gods in Valhalla. Balder, attempting to cheer her up, makes a fool of himself imitating a drunken fight in Valhalla, making her laugh, and you can guess what happens then.
Hanuman


At first, I thought Baldr was also a girl...


Wow! Your Hel is perfect! Never seen such a beautiful form of "half face red, half face blue" drawn.
lil8isis


I got curious with the Valhalla comic. is this the one by Peter Madsens?


Didn't Hades like kidnap Persephone and forcefully keep her in the underworld?


@LittleCrazyGamer In some versions of the story yes he did. In others, she went willingly sometimes with the help of Zeus.
Add comment: Please Sign in or create an accout to comment.