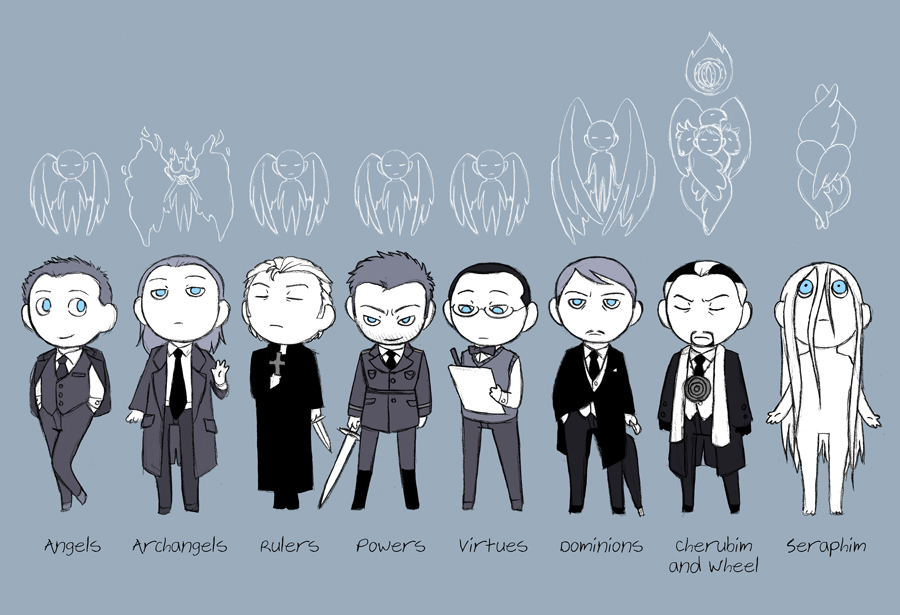 This is not meant to be educational. I've studied angels for years and took things from various theories and added some of my own and ended up with this for my story. If you want something closer or future away from traditional angels, make you own.

Angels
Their job is to act as guarding angels for humans, or simply deliver messages from heaven. Because they spend so much time on earth, they are by far the most human, and they don't have a strong need to return to God after their job is done. As a result they suffer from a lot of the same things as humans, such as confusion, doubt, sadness, temptation, and even lust. However, they try to stay chaste and are proud to be virgins.
Everything is very personal and about their human to them, and they will sometimes do immoral things for the sake of the person they watch over.

Archangels
They are a lot like normal angels, only they rule over them and are a lot more full of themselves. Their true form can be quite scary, and they often have to tell humans "Fear not" when they first encounter them because even in their human-friendly form they still have an aura of something powerful and unsettling about them. They too deliver messages and protect humans, but only holy or otherwise important people.

Rulers
They protect the religion, and will not take kindly to blasphemy. They also carry out the Powers' orders.

Powers
They like to say no angel has ever fallen from their ranks, but non other than Lucifer himself ruled them once. They fight demons and keep them out of Heaven, but they also have power over them and often use demons to do the dirty work they don't want to be blamed for later. Not surprisingly they don't have the best reputation and the Dominions keep a close eye on them.

Virtues
They mainly help the Dominions and inform the angels what their jobs are.

Dominions
Rules over all angels under them. They are the highest ranking angels who contact humans fairly regularly, but they are never pleased to leave Heaven and will try to do their job as quick as possible. They don't care for individual humans' faiths, and only see the big picture of things.

Cherubim and Wheels
Have by far the strangest true forms and are closely connected to each other. They always move together as if they were one, and when a Cherub take on a human form, his Wheel appears as a disk on his chest. They have no patience for humans and rarely (if ever) leaves Heaven.

Seraphim
By far the least human. They are the closest to God and only cares for praising him. If they leave his side and take a human form, they will only be looking up towards Heaven, muttering God's name between sentences, and doesn't wear clothes. Not a problem though, because they are sexless.


I wanna be Cherubim.
I hardly leave my room anyway.
Hail Lord English or whatever the fuck.
potatoe4life


Am I the only one who thought of Doctor Strange while looking at the Cherubim or nah?
Meree


I guess there are also the Nephalem, though they aren't technically angels, but half-angels
frank0ys


I want to be a Dominion!
theotherghostgirl


@theotherghostgirl: Yeah, I think so too! Archangel guy looks a bit like Loki and Dominions looks like Peter Cushing (with Peter Davison's hair?).
TheDoctorStarman2000


where did you find all this information :-)
FH2ElectricBugalu


So. . . the Virtues are like the secretaries and personal assistants of this group of people?


Aren't the Ophanim supposed to be the Wheels?
Rikist12345


It would be awesome if you made a comic about this where-in a human will be made in contact with the demons and the angels will intervene and they fall in love and make hybrid angel babies....... nevermind damn my imagination
Add comment: Please Sign in or create an accout to comment.